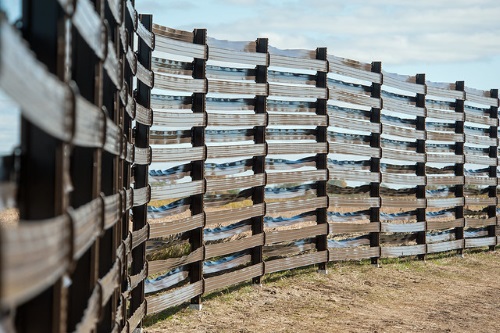 Sound barriers and snow fences along highways could possibly serve as platforms for generating low-cost solar energy, according to a new study funded by the Minnesota Department of Transportation.

That study – entitled Harnessing Solar Energy through Noise Barriers and Structural Snow Fencing – is investigating how solar panels could be added to existing highway noise barriers and snow fences along Minnesota highways to generate enough energy to provide power for homes and/or streetlights.

“Finding a way to integrate solar that maintains their structural integrity could transform the use of these barriers from single purpose to multi-purpose,” Dan Gullickson, the agency’s blowing snow control shared services program supervisor – who is overseeing this research project – explained in statement.

“We’ve seen some applications of solar panels on noise walls – primarily in European countries – but the addition of solar panels to snow fences is an entirely new concept,” he added.

Some of the unknowns the Minnesota DOT said it hopes to answer via this project include: Is it possible to engineer these structures without disrupting their functionality? What measures need to be taken to ensure the safety of the general public and agency workers if they come into contact with the panels? What are the lifecycle costs of installing and maintaining solar? How much energy could they generate and how does that connect with existing power grids?

The study will include surveys plus lab testing and/or modeling of possible design options and a cost-benefit analysis; all planned to be completed by of June 2021.