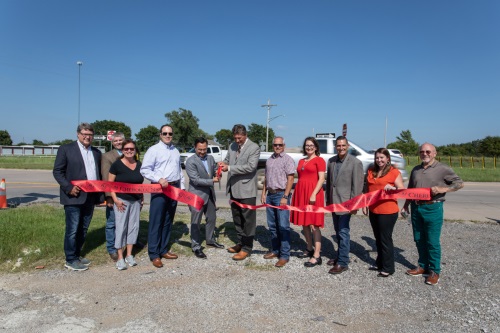 The Oklahoma Department of Transportation and the Cherokee Nation recently held a ribbon-cutting ceremony to highlight the completion of a $678,000 seven-month long highway safety improvement project along U.S. Highway 75 near Ochelata; a project that improved a key intersection to reduce motor vehicle collisions.

[Above photo via the Cherokee Nation.]

Between 2012 and 2017, some 37 collisions occurred at the US 75-W2900 road intersection, including five that resulted in fatalities. The intersection improvement plan constructed a series of “J-turns” in the roadway’s corridor, along with a southbound deceleration lane on the highway, to reduce the number of traffic conflict points and help improve safety.

Drivers at a J-turn intersection turn right in the same direction of traffic, merge into the left lane, and then make a U-turn in the direction they intend to travel.

“We are deeply appreciative of the continued partnership with the Cherokee Nation, which helped accelerate the start of this project by at least two years,” added Oklahoma Secretary of Transportation Tim Gatz.

“These safety improvements will be a great benefit for the drivers in the years to come, especially as traffic continues to grow in this corridor,” he said.

The Cherokee Nation said it received $411,000 through Tribal Transportation Safety Funds or TTSFs to help pay for this intersection project.

It was one of 94 tribes nationwide to receive TTSFs and the only tribe in Oklahoma to be awarded TTSF for a specific project.

“This intersection provides important access to Cherokee Nation’s Cooweescoowee Health Center in Ocheleta, where tens of thousands of patients are seen each year,” and Cherokee Nation Principal Chief Chuck Hoskin Jr. in a statement.

“The Cherokee Nation is always proud to work with the Oklahoma Department of Transportation, especially when our work helps prevent collisions and makes a route safer,” he added. “This is a great example of the strengths of a partnership between the Cherokee Nation and the state of Oklahoma.”