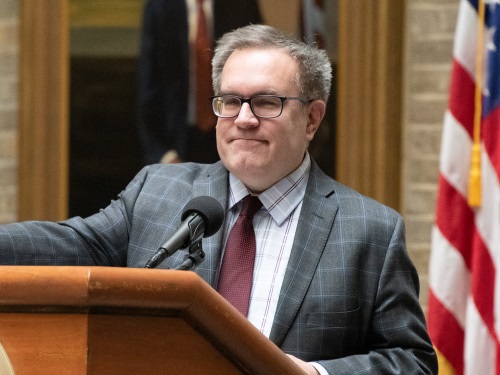 On September 24, the Environmental Protection Agency threatened to levy highway funding sanctions on California due to its backlog of 130 air quality state implementation plans or SIPs – an action EPA Administrator Andrew Wheeler (seen above) said is a “necessary step toward” ensuring compliance with the agency’s National Ambient Air Quality Standards.

[Above photo by Lance Cheung, U.S. Department of Agriculture.]

“California has failed to carry out its most basic responsibilities under the Clean Air Act, and as a result, millions of Californians live in areas that do not meet our nation’s air quality standards,” Wheeler said in a letter to California Air Resource Board Chairman Mary Nichols.

The EPA added in a statement that California has “the worst air quality in the United States” with 82 nonattainment areas and 34 million people living in areas that do not meet NAAQS – more than twice as many people as any other state in the country.

Wheeler asked CARB in his letter to withdraw the backlogged plans and come up with new ones or face the withdrawal of highway funding, which could take up to 18 months. According to the Federal Highway Administration data, California is projected to receive more than $19 billion between fiscal years 2016 and 2020.

CARB Executive Officer Richard Corey replied in a statement that “the letter from the EPA contains multiple inaccuracies, omissions and misstatements … [and] it sat on these documents for years and is now pounding the table about paperwork issues of its own creation.”

He added that California has met federal standards in the past and “we are working hard to meet the current ones. But we cannot get there until the federal government addresses emissions of federally regulated mobile sources, including heavy-duty trucks, locomotives, planes and ships.”

As an aside, Governor Tim Walz (D) moved to implement two clean cars standards in Minnesota developed by California that the Trump administration is trying to eliminate.

On top of that, the state’s new zero-emission vehicle (ZEV) standard requires automobile manufacturers to deliver more vehicles with ultra-low or zero tailpipe emissions for sale in Minnesota, including electric vehicles and plug-in hybrid models.