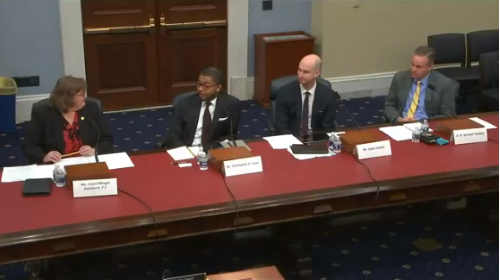 A September 25 hearing held by the House of Representatives Committee on the Budget examined the need for increased across-the-board infrastructure funding – including more money for roads and bridges – while also touching on the need to beef up revenue flows into the Highway Trust Fund and repeal the $7.6 billion rescission in Federal-aid highway contract authority schedule for July 1 next year.

Carol Ellinger Haddock, director of the city of Houston’s public works division, testified on behalf of the American Society of Civil Engineers and emphasized the need to increase motor fuel taxes as a way to boost surface transportation funding for the future.

“We need to fix the Highway Trust Fund; the federal government has always been a leader in strengthening our nation’s surface transportation system and ASCE is on record supporting a 25-cent increase in the federal motor fuel tax increase,” she said. “We also face a looming crisis with the FAST [Fixing America’s Surface Transportation] Act rescission – a $7.6 billion annual reduction that will affect all 50 states.”

The American Association of State Highway and Transportation added in written testimony submitted by Rep. Seth Moulton, D-Mass., into the hearing’s record that “the planned FAST Act rescission next summer is already starting to impact project construction, which will delay mobility, quality of life, and economic benefits provided by these projects if unaddressed soon.”

AASHTO said that if the rescission is not repealed, “it will reduce the baseline investment level for highway contract authority programs by $75.7 billion over the next 10 years.”

Rep. John Yarmuth, D-Ky., chairman of the House Budget Committee, stressed in his opening statement that more funding is necessary to improve the nation’s infrastructure as a whole.

“If we, as a Congress, want to prepare our economy and our nation for a rapidly changing future, we must dramatically improve and modernize our infrastructure,” he said. “A strong economy depends on strong infrastructure to function effectively. Unfortunately, according to the ASCE’s 2017 Infrastructure Report Card, our overall infrastructure grade is a D+, meaning that it’s in poor condition and at risk.”

Rep. Yarmuth added that, from 2016 to 2025, American households are expected to lose, on average, $3,400 in income every year due to infrastructure deficiencies.

“Despite all these costs, federal infrastructure spending has been on the decline and has failed to come anywhere close to meeting growing needs,” he said. “If we want American businesses and workers to succeed, we need to start investing in bold structural changes that will strengthen our economy and prepare us for the future.”

Ranking Member Rep. Steve Wommack, R-Ark., added that “infrastructure is part of the core foundation of the America we all know, vital to mobility of families, businesses and our economy. It is vital that infrastructure keeps pace with the nation it supports.”

But he added that “we have to rethink how we plan, fund, and build infrastructure,” noting that “government red tape and burdensome permitting regulations have also throttled progress. While it is important to ensure we protect the environment, we must do so in a way that makes these projects more feasible.”

Professor Richard Geddes, director of the Cornell Program in Infrastructure Policy at Cornell University added in his testimony that “there is widespread agreement that the United States is spending too little on its infrastructure.”

He noted that the Congressional Budget Office estimated that combined federal, state and local spending on infrastructure was – calculated in current 2019 dollars – $441 billion as of 2017, which is “well below estimates of the spending needed to keep infrastructure in a state of good repair.”

He also argued that delivering projects would be enhanced through a streamlining of the National Environmental Policy Act or NEPA process.

“There is widespread agreement that the process requires reform,” Geddes said. “For example, a highway project may require 10 different federal agencies considering 16 separate permitting decisions to obtain approval. State and local governments often have their own permitting requirements.”

He added that the “One Federal Decision” approach to permitting – an approach included in the Senate Environment and Public Works Committee’s surface transportation funding reauthorization bill adopted by the panel in July – could help speed up the completion of critical transportation projects.

“Our analysis of data on 1,269 projects indicates that the time from Notice of Intent or NOI, the formal announcement of intent to prepare an Environmental Impact Statement, or EIS, to Record of Decision or ROD – the official recording of a Federal agency’s decision concerning the proposed action – has increased from about four years in 2010 to over five [years] presently,” Geddes explained. “Over 7 percent of the projects in our data set were delayed for more than 10 years [and] two projects were even delayed for more than 20 years.”

That is why he believes the “One Federal Decision” approach “would help reduce the substantial uncertainties – and thus costs – currently surrounding NEPA project approvals.”