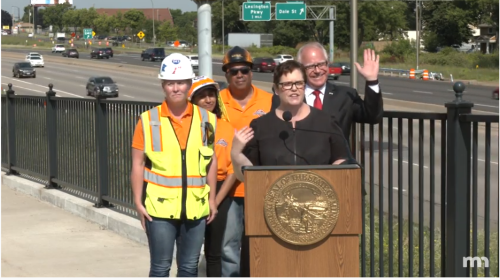 “Reducing greenhouse gas emissions is critical to MnDOT’s vision of maximizing the health of people, the environment and our economy,” noted Margaret Anderson Kelliher (seen at podium in above photo), the agency’s commissioner, in a statement.

“I’m proud of the proactive efforts our team has taken to engage the public and other agencies in this discussion, and develop meaningful actions and recommendations that will help Minnesota achieve a low-carbon transportation future,” she said.

The Pathways report includes a number of action items that the Minnesota DOT plans to pursue, including: the creation of a Sustainable Transportation Advisory Council; regional collaboration on the creation of electric vehicle corridors; and analyzing GHG emissions in transportation projects.

“There is a real need in this community to address not only the transportation movement of cars and transit, but people want to bike safely and they want to walk safely,” she explained during a meeting with the Rochester Post Bulletin on September 16. “And to be able to do that, you actually need more resources.”

Anderson Kelliher added that the debt service fee would be used to pay off outstanding bonds that are consuming more of the department’s budget, which she estimated will be at $275 million in a few years.