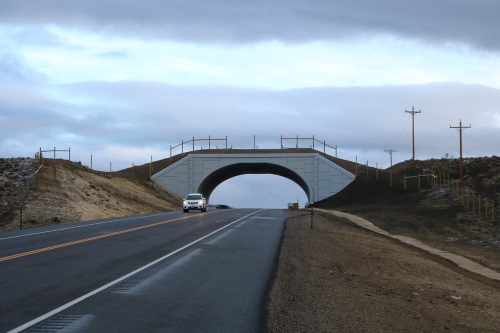 A new report compiled by the Pew Trusts highlights the work states are doing to boost safe passage for wildlife around roadways, while at the same time improving motorist safety.

“Big-game animals in the American West today are increasingly squeezed by growing suburban areas, energy development, climate change, and an expanding road network – factors that are threatening the landscape connections that wildlife need to move to and from their seasonal feeding and breeding grounds,” noted Matt Skroch, a manager with the Pew Charitable Trusts’ U.S. public lands and rivers conservation team, in the September 16 report.

“To conserve wildlife corridors while reducing wildlife-vehicle collisions in the West, state and local governments need to take the lead on these issues and guide their agencies to effectively link science with policy,” he explained. “Fortunately, this is beginning to happen. From Montana to New Mexico, states are identifying hot spots where collisions occur and linking those areas with the larger habitat conservation needs on either side of the road.”

A number of different wildlife crossing projects developed by various state departments of transportation – often in concert with other state agencies and environmental groups – represents one avenue being pursued to significantly reduce animal-vehicle collisions on major highways.

One example is a joint Nevada Department of Transportation and Nevada Department of Wildlife that installed nine safety crossings installed on Interstate 80 between Wendover and Wells and U.S. 93 north of Wells in the northeastern portion of the state; an effort that garnered a 2019 Environmental Excellence Award from the Federal Highway Administration in August.

Those wildlife overpasses covered with native soil and vegetation to replicate the natural environment, with roughly 60 miles of eight-foot-high fencing installed along both sections of the roadways redirecting and encouraging deer, mules, and other animals to use the crossing points.

Research conducted by the University of Nevada/Reno found that, during the first four years in which the U.S. 93 safety crossings were installed, more than 35,000 mule deer used a safety crossing during their seasonal migrations; keeping them off the road and helping prevent potential collisions with vehicles.

The Nevada DOT and Nevada DOW also used GPS collars to help track and identify the most critical deer migration and roadway crossings points, which concentrated between the Jarbidge and Pequop mountain ranges. In recent years on I-80 alone, the Nevada DOT noted that one motorist death, 12 injuries and more than 200 wildlife-vehicle collisions occurred in that area – representing half of all reported wildlife-vehicle collisions along the entire length of I-80 in the state.

[The Washington State Department of Transportation provides another example as it built a wildlife ‘overcrossing’ three years ago that spans Interstate 90.]

Separate studies are also backing up the efficacy of such wildlife crossing infrastructure endeavors.

The signs are equipped with light emitting diodes or LEDs that flash when wildlife are detected in the area, providing a visual warning to motorists.

Reducing wildlife and vehicle collisions is also an area of policy and funding emphasis in the five-year highway reauthorization passed by the Senate Environment and Public Works Committee on July 30.

Video: Every Day is Earth Day for State DOTs