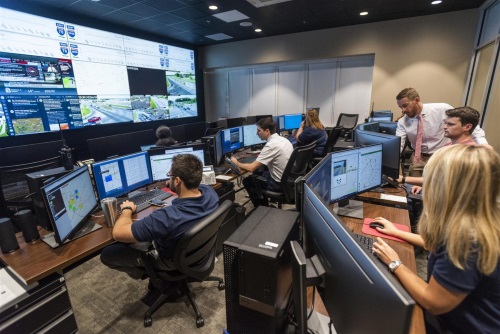 Researchers at the University of Alabama are embarking on a three-year $16.8 million project to transform the roads and highways in the Tuscaloosa area into a “smart transportation network” that is safer, less congested, and more environmentally friendly.

[Above photo of the West Central Region Traffic Center – a command and control center established by the Alabama Department of Transportation on the campus of the University of Alabama – courtesy of the Alabama Transportation Institute.]

In conjunction with the Alabama Department of Transportation, the Tuscaloosa County Road Improvement Commission, the cities of Tuscaloosa and Northport, transportation consulting firms, as well as local manufacturing and trucking companies, researchers with the university’s Alabama Transportation Institute are installing 24 video cameras along a 32-mile stretch of Interstate 59 where fiber optic cable will be laid.

Additionally, cable median sensors will be placed along a 10-mile stretch of the interstate as part of an “alert system” to speed up motor vehicle crash emergency response.

Another key element of the project is expanded deployment of the dedicated short-range communication or DSRC radios that relay traffic information to traffic signal controllers.

That would help boost roadway carrying capacity as increasing the number of motorists arriving on a green signal at traffic lights by 17 percent is a level of improvement nearly equivalent to adding a new lane, the researchers explained.

Called the Advanced Connected Transportation Infrastructure & Operations Network, or ACTION for short, the program’s goals include reducing secondary crashes by 20 percent, increasing travel time reliability by 25 percent, reducing vehicle emissions by as much as 5 percent, and minimizing production downtime for just-in-time manufacturers in the area by 5 percent.

“What sets this project apart is that we will have this system on roads that the public uses as opposed to doing this on a very protected test track or test bed,” emphasized Dr. Shashi Nambisan, the ATI’s executive director, in a statement. “Our test bed is the road that you and I and everyone else drives on.”

KYTC Prepares to do Battle with ‘Noxious Weeds’