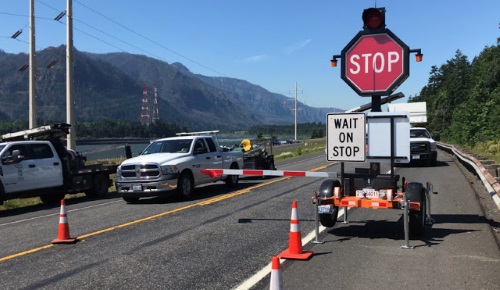 The Washington State Department of Transportation is widening its use of automated flagger assistance devices or AFADs – more commonly called “robo flaggers” – as a way to reduce the risks faced by highway work crews.

According to a blog post, the agency said such portable flagging devices – first used by WSDOT on a trial basis in 2002 and put into regular service in 2004 – are often more visible than human flaggers and motorists tend to see them from a greater distance away, especially when it’s raining or foggy.

“Most importantly, if a person driving through a work zone doesn’t see the robo flagger, the equipment takes the hit rather than our highway worker,” explained Tamara Greenwell, a WSDOT strategic communications specialist.

However, the name “robo flagger” is somewhat misleading as certified human flaggers operate them. WSDOT said that the operator is stationed off the roadway in a more protected location like a work vehicle or behind a guardrail – close enough to see traffic and the work zone to respond to traffic in real time, but far enough away that they are safer in case of an incident.

The agency added that its robo flaggers are largely put to use along two-lane roadways, where alternating one-way traffic operations are needed to safely perform highway preservation work like paving, guardrail installation, or bridge work.