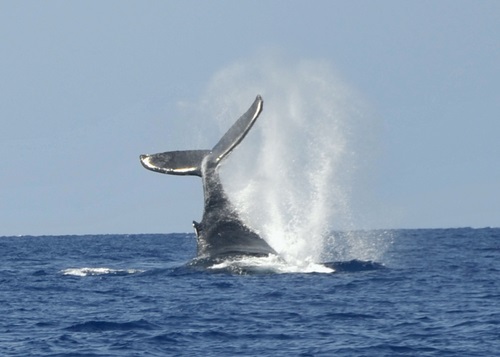 The Washington State Ferries – a division of the Washington State Department of Transportation – rolled out a new “whale alert” mobile phone application and web-based warning system to provide ferry captains with more accurate and updated location information for southern resident Orcas and other whale species throughout Puget Sound area.

[Above photo by the U.S. Coast Guard.]

The agency said access to the Whale Report Alert System is only granted to the commercial maritime operators such as ferries, ships, and tugboats; it is not available for public use or for whale watch operators.

Developed by marine firm Ocean Wise with funding from the Government of Canada, the Port of Prince Rupert, and the Port of Vancouver’s Enhancing Cetacean Habitat and Observation or ECHO program, the new “whale alert” system relies on real-time sightings – reported by members of the public via the Ocean Wise WhaleReport smartphone application – to inform commercial mariners of whale presence.

WSF – which has been a member of the ECHO program’s advisory working group since 2015 and helped in beta testing of WRAS – noted in a statement that each alert also supplies other pertinent details such as the species observed, the direction of whale travel, the time of the report and the number of whales in the group.

The agency added that the system is expected to provide ferry captains and other commercial mariners with better information about large marine mammal locations in the vicinity of their vessels so ferry captains can make decisions to change course or reduce speed to avoid disturbing or colliding with marine mammals.

“Because we operate our 22 ferries on Puget Sound and manage 20 terminals on its shores, we have an obligation to ensure WSF is doing everything we can to protect our environment, including marine life,” said WSF Assistant Secretary Amy Scarton.

Fri-YAY! 👐 Want all of today's transportation news? Look no further than right here in the AASHTO DTU.

Sign to get it delivered every week day.
dailyupdate.transportation.org ...