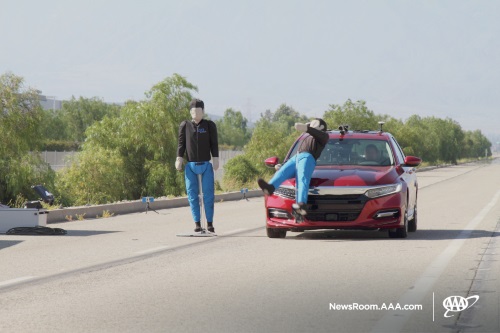 [Above photo by AAA.]

AAA also found that AEB systems are “challenged” by real-world situations, such as a vehicle turning right into the path of an adult.

In partnership with the Automobile Club of Southern California’s Automotive Research Center, AAA said in a statement that it evaluated the performance of four midsize sedans equipped with AEB systems featuring pedestrian detection on a closed course using simulated pedestrian targets.

Overall, the systems performed best in the instance of the adult crossing in front of a vehicle traveling at 20 mph during the day, avoiding a collision 40 percent of the time. But at the higher speed of 30 mph, most systems failed to avoid a collision with the simulated pedestrian target. The other scenarios proved to be more challenging for the systems:

The group added that the complete methodology for this testing can be found within its full research report.

“The rise in pedestrian deaths is a major concern and automakers are on the right path with the intent of these systems,” said Greg Brannon, AAA’s director of automotive engineering and industry relations, in a statement – noting that, on average, nearly 6,000 pedestrians lose their lives each year.

“Our goal with this testing is to identify where the gaps exist to help educate consumers and share these findings with manufacturers to work to improve their functionality,” Bannon noted.

FTA Issues over $1.6B in Clean Bus Grant Awards

USDOT Issues Over $2B in New RAISE Grants