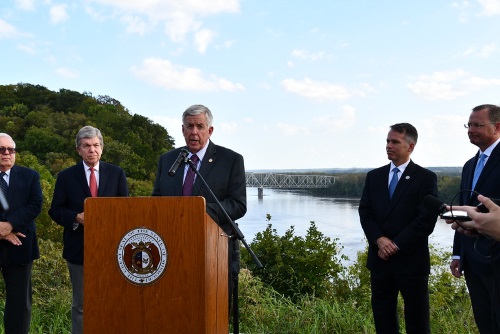 On October 2, Missouri Governor Mike Parson (R) held a press conference with Senator Roy Blunt, R-Mo., Missouri Department of Transportation leadership, members of the Missouri Highways and Transportation Commission, and other local officials to review the upcoming effort to replace the I-70 Rocheport Bridge spanning the Missouri River – a project expected to cost $255.8 million overall.

[Above photo by the Missouri Governor’s Office.]

“From the very beginning, our administration has been focused on investing in and improving Missouri’s infrastructure, specifically its transportation infrastructure. The Rocheport Bridge is a critical part of our highway system that has long been in need of repair,” the governor said during the press event, adding that the U.S. Department of Transportation awarded Missouri an $81.2 million Infrastructure for Rebuilding America or INFRA grant back in July to help MoDOT replace that bridge.

“This grant not only gives us the funds to complete this major project but also frees up additional funding for other high-priority transportation needs across the state,” Gov. Parson explained.

He pointed out that Missouri’s receipt of the INFRA grant in July triggered a $301 million state bonding effort that will eventually be repaid out of general revenue over a seven-year period.

The project aims to replace the existing four-lane I-70 Rocheport Bridge with a structure that will be initially configured to four lanes to match I-70, with future modifications to six lanes should an I-70 expansion be funded. The existing bridge – built in 1960 – carries 12.5 million vehicles per year, including 3.6 million trucks, and will continue to be used during construction to spare travelers lengthy traffic delays.

Patrick McKenna – the Missouri DOT’s director and recently elected to serve as the American Association of State Highway and Transportation Officials 2019-2020 president – noted in testimony before the Senate Committee on Environment and Public Works in March that the Rocheport Bridge “quite literally links Kansas City and St. Louis to each other and to the rest of the United States. Any delay at Rocheport Bridge negatively impacts the regional and national economy.”

That gives seemingly local transportation assets a “nationally impactful nature,” which is why the replacement of aging structures like the Rocheport Bridge is so critical to the country’s economy and the quality of life of its citizens, he said.

“We are more connected now than ever before by our infrastructure and we must rise to the challenge to renew and revitalize this national asset,” McKenna emphasized.

“We have made outstanding progress toward improving Missouri’s bridge infrastructure this year, but we still have a long way to go,” Gov. Parson pointed out during his press conference.

“With one of the nation’s largest but lowest-funded highway systems, Missouri currently has 909 bridges in poor condition and more than $8 billion in unfunded transportation needs,” he said. “Transportation drives our economy [so] we will continue working to invest in infrastructure and address these critical road and bridge needs.”