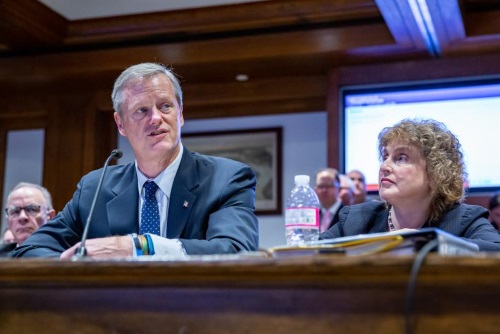 On October 8, Massachusetts Governor Charlie Baker (R) (seen above at left) and Stephanie Pollack (in above photo at right), secretary of transportation for Massachusetts, appeared with Steve Poftak, general manager of the Massachusetts Bay Transportation Authority, at a hearing before the state legislature in support of a proposed bill seeking an additional $18 billion in transportation capital spending authorization.

Gov. Baker noted in his testimony that the $18 billion in extra funding would help “accelerate the initiatives already underway to modernize our transportation system” as well as invest $500 million in municipal transportation needs. The bill would also seek to reduce the impact of greenhouse gas emissions, improve the resiliency of our transportation networks, fund new tools to manage regional and local traffic congestion, and “perhaps, most importantly, address barriers to innovation” that will allow MassDOT and MBTA to accelerate the delivery of those projects.

“MassDOT and the MBTA’s investment strategy is focused on delivering the benefits of a revitalized and resilient transportation system to residents across the Commonwealth, while also advancing projects that expand the reach of transit and target traffic bottlenecks,” he explained. “Both are making up for lost time on deferred maintenance, while investing in new capacity and dramatically improving system reliability.”

The governor noted that “we have an enviable problem” in Massachusetts. “Our economy is growing, our population is growing, [but] the economic activity that dominates our Commonwealth is constrained by the limits of our current [transportation] system,” he stressed. “This legislation … along with the recommendations in our Congestion Report will make it possible for us to create the transportation infrastructure we will need to continue to grow.”