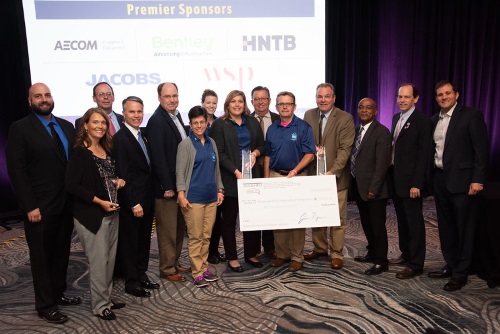 The Infrastructure Improvements to Downtown St. Louis project – a collaboration between Illinois and Missouri DOT teams (seen above)  that delivered major multimodal enhancements to both states – received the Grand Prize in the 2019 America’s Transportation Awards competition during the 2019 American Association of State Highway Transportation Officials annual meeting in St. Louis. The $801 million project dramatically improved travel times for residents of both states and provided a new connection to the iconic St. Louis Arch.

[Above photo by Cathy Morrison/MoDOT.]

Sponsored by AASHTO, AAA, and the U.S. Chamber of Commerce, the 12th annual America’s Transportation Awards competition evaluated projects in three categories: Quality of Life/Community Development; Best Use of Technology & Innovation; and Operations Excellence. Overall, 39 state DOTs nominated 81 projects in four regional contests, with the four highest-scoring projects in each region comprising the list of 12 national-level finalists that battled it out head-to-head for the two prizes noted above.

“This annual competition is tough,” said Jim Tymon, AASHTO’s executive director, in a statement. “All 81 of this year’s project nominees demonstrate the many ways transportation improves the quality of people’s lives. Some of these projects increased mobility by giving commuters more travel options, including biking and walking. Others spurred economic development, cut traffic congestion, or improved safety. And while we honor today’s champions, the biggest winners are by far the American people.”

The collaborative Illinois/Missouri DOT project involved relocating an interstate to the Stan Musial Veterans Memorial Bridge; a four-lane cable-stayed bridge that opened in 2014. That bridge set the stage for a broad swath of further improvements, including new lane ramps leading to and from the bridge, as well as an extra lane between St. Louis and St. Clair County in Illinois. A park then replaced the previous interstate location, with bicycle and pedestrian access points added to the banks of the Mississippi River.

Georgia DOT’s $834 million project to reduce traffic congestion, along the I-75 and I-575 corridor in Atlanta, included approximately 30 miles of reversible express lanes, six new express interchanges and bridge improvements. Motorists now have more access points to the express lanes giving them the option of paying more to bypass traffic congestion.

The Grand Prize and the People’s Choice awards each come with $10,000 cash prizes to be used to support a charity or transportation-related scholarship program of the winning state DOTs choosing. Learn more about the contest and this year’s entries at www.americastransportationawards.org.