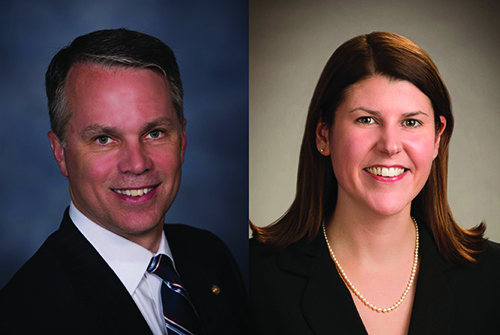 Patrick McKenna, director of the Missouri Department of Transportation, has been elected to serve as the American Association of State Highway and Transportation Officials 2019-2020 president.

The organization also elected New Hampshire Department of Transportation Commissioner Victoria Sheehan as its vice president – only the second woman in the association’s 105-year history to serve in that capacity.

McKenna – appointed as Missouri DOT’s director in 2015 – said in a statement that he plans to emphasize the need for surface transportation funding reauthorization and highlight transportation safety as the major focus areas of his one-year term.

“We need to make clear the public benefit of federal surface transportation investment and its impact on the safety, mobility, health, and economic well-being of all Americans,” he explained in his emphasis areas paper released at the meeting.

The expiration of the 2015 Fixing America’s Surface Transportation or FAST Act in September 2020 means reauthorizing surface transportation funding will occur in a Presidential election year: “a tall task, but one that AASHTO and its members must fully embrace [as] state DOTs depend on the funding stability provided by multi-year transportation program,” McKenna said.

Launching a national campaign focused on how “transportation is personal” that explains the many benefits transportation investment provides to all Americans is one tactic McKenna plans to spearhead during his term as AASHTO’s 2019-2020 president as part of the organization’s effort to get surface transportation funding legislation reauthorized.

He also plans to place renewed focus on reducing transportation fatalities, which McKenna described as a “national public health crisis” in his remarks.

“Despite tremendous advances in technology and millions invested in [driver] education, the annual loss of life on our nation’s roads is staggering,” he said, noting that the National Highway Traffic Safety Administration’s most recent estimates indicated that 36,700 people died on America’s roads in 2018.

To help reduce those losses, McKenna said AASHTO will continue its role in the Towards Zero Deaths and Vision Zero national coalitions while “facilitating a conversation” with state DOTs and local communities to consider ways to deploy “innovative infrastructure designs and technologies” to more safely accommodate pedestrians, bicyclists, and scooter users.

McKenna – who recently completed a one-year term as AASHTO’s 2018-2019 vice president – also served as president of the Mid America Association of Transportation Officials for 2017-2018 and is a member of the executive committee for the National Academy of Science’s Transportation Research Board.

Sheehan, AASHTO’s 2019-2020 vice president, became the commissioner of the New Hampshire DOT in 2015 after a 10-year career in the Massachusetts Department of Transportation’s highway division, where she served in a number of roles including accelerated bridge program manager, bridge program consultant contracts administrator, and finally as manager of strategic planning and highway performance.

Originally from Northern Ireland, Sheehan holds a Master’s Degree in Structural Engineering and Architecture from the University of Edinburgh in Scotland.

She lives in Nashua, New Hampshire, with her husband Sean.