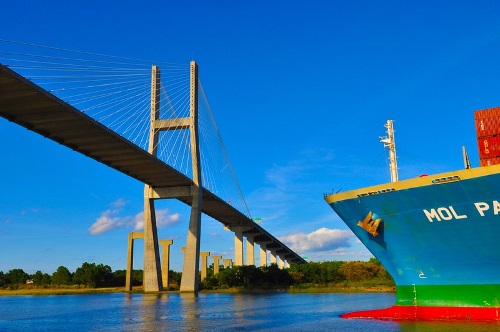 A new video crafted by the Georgia Department of Transportation highlights the ongoing work of the Georgia Commission on Freight and Logistics, of which Georgia DOT Commissioner Russell McMurry is a member.

[Above photo by Cedric Mohr for the Georgia DOT.]

The video highlights key concerns expressed at a recent commission meeting held in Savannah – home to the Port of Savannah and the Garden City Terminal, reportedly North America’s single-busiest freight container terminal – as it looks for ways to move freight more efficiently throughout the state while spurring economic growth and job creation.

“Georgia has made significant investments to upgrade and maintain our transportation network, but our work is not complete,” noted Georgia DOT’s McMurry in a statement.

He noted that a recent national freight report ranked Georgia 10th among states for the highest value of freight by all modes of transportation in 2016, handling approximately $843 billion worth of freight.

That report also noted that Georgia ranks 17th in terms of states with the largest annual projected increase in truck freight by value between 2016 and 2045. Furthermore, Georgia ranked seventh in total weight shipped by truck, with more than 430,000 tons shipped in 2016.

“With Georgia expected to move from eighth in population among states to fifth by 2040, a long-term federal commitment to infrastructure funding will give Georgia DOT the ability to continue making strides in offering the smartest and most effective transportation solutions to keep people and freight moving,” he said.