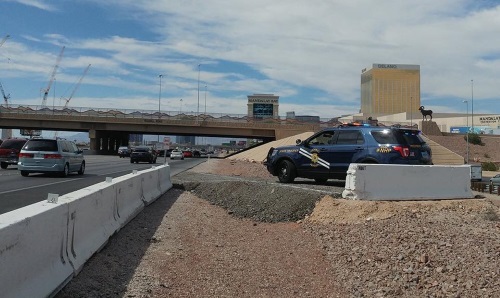 The Nevada Department of Transportation, in partnership with the Nevada Highway Patrol and the Regional Transportation Commission of Southern Nevada or RTC are using artificial intelligence or AI software developed by Waycare to identify and deploy five new Strategic Traffic Management Sites or STMS via a Road to Zero federal grant.

This deployment is the outgrowth of a pilot project launched last year that reduced primary crashes by 17 percent along a key corridor of Interstate 15 in Las Vegas – without requiring any additional resources from state or local agencies.

Now that same technology is being used at those five new STMS locations along “high-risk” corridors of both I-15 and US-95 – elevated, protected platforms in visible locations built by the Nevada DOT that law enforcement personnel can use to encourage drivers to slow down.

In conjunction with NHP and the Nevada DOT, RTC is using dynamic messaging boards in key areas ahead of STMS sites to encourage drivers to slow down and drive cautiously.

“Working collaboratively with NDOT, NHP and Waycare has yielded impressive results that translate into enhanced safety on Southern Nevada roads,” explained Tina Quigley, RTC’s CEO. “This grant will enable us to build on the early successes and further leverage advanced technology solutions to improve traffic conditions on our busy highways.”

“We are proud to have been awarded the Road to Zero grant that allows NHP to continue to work in partnership with the Nevada DOT and RTC, and further the use of Waycare’s cutting-edge technology to make a significant difference in traffic congestion and crashes,” added NHP Lieutenant John Arias.

[As an aside, the Nevada DOT recently highlighted how carpooling can help reduce traffic congestion and save commuters money.]

The Nevada STMS project is occurring alongside nationally-focused efforts to better manage the flow of real-time data into AI-based systems – including traffic networks using AI-software.

And Sandia’s research team is using Chicago traffic data – such as images, integrated sensors, tweets and streaming text – to test its AI software work; measuring traffic congestion and suggest faster driving routes around it for a Chicago commuter

“We wanted to see what can be analyzed with real-time data from multiple data sources, not what can be learned from mining historical data,” explained Tian Ma, a Sandia computer scientist and project co-lead, in a statement. “Actionable intelligence is the next level of data analysis where analysis is put into use for near-real-time decision-making. Success on this research will have a strong impact to many time-critical national security applications.”