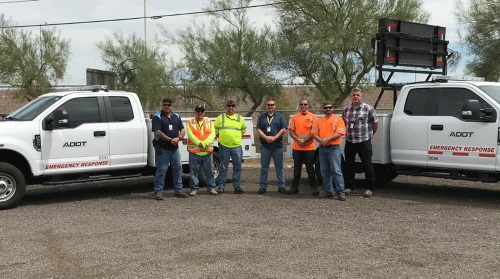 To improve roadside safety and minimize traffic disruption due to motor vehicle crashes in the Phoenix area, the Arizona Department of Transportation created 14 incident response units to work alongside state troopers and other first responders to provide traffic control services while removing debris from freeways and doing minor infrastructure maintenance as needed.

The IRU units, part of the Arizona DOT’s Traffic Systems Management and Operations or TSMO division, will patrol Phoenix-area freeways weekdays from 5 a.m. to 8 p.m. and will be on call overnights and weekends. The units come equipped with message boards and traffic cones so they can provide faster response times to motor vehicle crashes, noted Brent Cain, director of the agency’s TSMO division, in a statement.

Previously, maintenance crews had to stop their work and return to maintenance yards to pick up vehicles and equipment before responding to crashes, he said.

Cain added that the goal of the IRU teams is three-fold: reducing crashes that often occur in traffic backups; supporting traffic flow on Valley freeways; and freeing state troopers from traffic control duties so they can concentrate on crash investigation.

“Secondary crashes are often worse than the initial incident,” Cain noted. “By having units ready to respond and quickly clearing minor crashes off the road or setting up proper traffic control, it’s going to improve safety for motorists and first responders.”