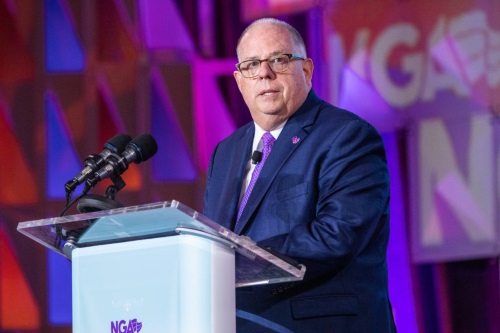 The Governors of Maryland, Michigan, and Tennessee held the second of four planned national infrastructure summits with policy and technology experts in Detroit on October 19 to discuss emerging trends and best practices for securing vital infrastructure against human-caused and natural threats.

[Above photo of Gov. Larry Hogan by the National Governors Association.]

This summit of series supports a broad initiative launched by Maryland Gov. Larry Hogan (R) as part of his one-year tenure as chair of the National Governors Association; an effort that seeks to reduce the threats cyberattacks and extreme weather pose to U.S. energy, transportation, and water infrastructure, alongside an examination of funding options.

“While no public policy can prevent all disasters, governors and leaders across America can show real leadership, and work together to find innovative new ways to withstand disasters better, and to respond and recover more quickly,” Gov. Hogan noted in an editorial co-authored with Michigan Gov. Gretchen Whitmer (D).

“Since 1980, the nation has experienced disasters costing $1.6 trillion total [and] almost one-third of those costs came in just the last three years,” he said.

“Beyond physical disasters are the digital ones. Our technology-driven infrastructure is increasingly vulnerable to cyberattack, and the electric grid is a prime target,” Gov. Hogan added. “In 2016, roughly 20 percent of incidents reported by the U.S. Department of Homeland Security were directed at the energy sector, which itself supports other vital services – from our water supply to communications and transportation to medical care.”

“Infrastructure connects everyone in our states,” added Tennessee Gov. Bill Lee (R) in a statement. “From roads, to water, to electricity, to cybersecurity, we need a comprehensive and thoughtful approach to addressing these many challenges.”

The Detroit summit follows a similar event held in Boston in August that focused on measures being developed to reduce traffic congestion. It also follows a study tour led by Gov. Hogan to Australia in late September to explore that country’s “innovative funding models” for financing infrastructure investments.