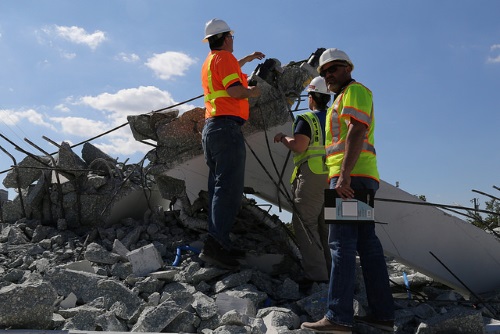 The National Transportation Safety Board determined engineering errors are the probable causes of a fatal pedestrian bridge collapse that occurred last year in Miami. Those errors caused the partially constructed 174-foot-long, 950-ton Florida International University pedestrian bridge to crack and subsequently collapse, killing six people and injuring 10 others when it fell onto the street below, crushing eight vehicles.

“Errors in bridge design, inadequate peer review and poor engineering judgment led to the collapse of this bridge,” NTSB Chairman Robert Sumwalt explained in a three-hour public hearing on October 22.

“The failure of all concerned parties, to recognize and take action on the threat to public safety presented by the significant observed bridge structure distress prior to the collapse, led to the tragic loss of life in this preventable accident,” he said.

Faulty calculation errors made by FIGG Bridge Engineers, Inc. – compounded by what was called an “inadequate peer review” conducted by engineering firm Louis Berger – were the main “probable causes” of the elevated walkway’s failure, the agency said; representing two of 30 findings NTSB issued in its analysis of the incident which occurring on March 15, 2018.

NTSB added that its final report on this incident will be released “in the coming weeks.”

The three recommendations issued to AASHTO were:

“The events surrounding the FIU bridge collapse are absolutely heartbreaking for both the families and loved ones of the victims, but also for the community and state,” said Kevin Thibault, Florida DOT’s secretary, in a statement.

“The department has and will continue to cooperate fully with the NTSB as part of this process and has already implemented many of the improvements discussed today,” he added. “I remain committed to ensuring that all NTSB recommendations are followed so a tragedy like this never happens again in Florida.”