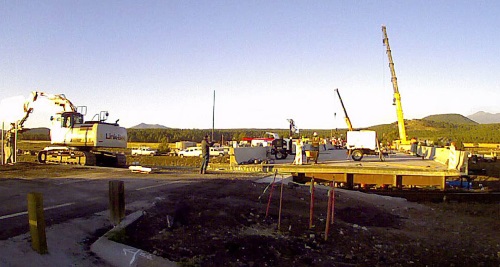 Arizona DOT’s project contractor proposed using the technique which reduced what is typically six to eight months of traffic impacts on Interstate 40 to a nine-day closure of Transwestern Road, which crosses the interstate just west of Flagstaff.

The contractor’s proposal grew out of Arizona DOT’s value engineering process, which analyzes plans looking for ways to improve quality and value while reducing time needed to complete improvements.

Once the new bridges were complete, crews diverted I-40 traffic to the on- and off-ramps in order to demolish the old bridges, the Arizona DOT said. Workers then used hydraulic jacks to lift and move the new Bellemont/Transwestern Road bridges into place; a process took about four-and-a-half days.