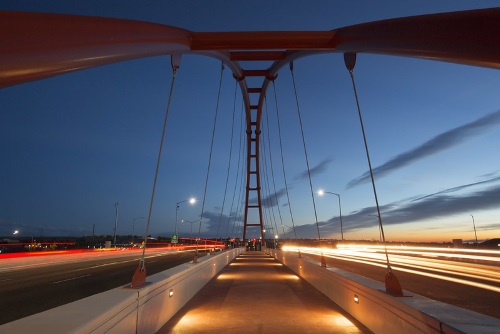 The Federal Highway Administration plans to release a notice of proposed rulemaking on November 12 that would overhaul National Bridge Inspection Standards. Key changes for state departments of transportation within the NPRM center on the implementation of a risk-based approach to determining appropriate bridge inspection intervals and the requirement for the collection and use of element level bridge inspection data.

[Above photo by Bear Gutierrez/Colorado DOT.]

The FHWA said in its 102-page NPRM that its proposed revisions applies to inspections of bridges on all public roads, on and off Federal-aid highways, including tribally and federally owned bridges, as well as private bridges connected on each end by a public road – just as current inspection rules do.

According to a brief analysis by American Association for State Highway and Transportation Officials staff, while the use of this new “risk-based approach” – detailed on pages 29 and 34 of the NPRM – is not a requirement, bridge “owners” including state DOTs, federal agencies, tribal governments, and others may choose to use it on some or all of their bridge inventory.

The second major proposed change is the mandated collection and use of element level bridge inspection data, which is related to the risk-based evaluation for bridge inspection intervals. While there are limited details regarding this change within the NPRM itself, the FHWA offers guidance in documentation attached to its rulemaking: https://www.fhwa.dot.gov/bridge/nbi/131216_a1.pdf.

The agency also seeks to repeal two outdated regulations as part of its proposed rulemaking – the Highway Bridge Replacement and Rehabilitation Program and the Discretionary Bridge Candidate Rating – as they are no longer needed.

Finally, the agency emphasized that “in this day of significant technological advancements, other disruptive technologies will be developed that will change the way inspectors perform bridge inspection. As they are developed, FHWA will continue to evaluate these new tools in partnership with our stakeholders and update its bridge inspection guidance documents.”

Those include the use of sonar technologies for underwater bridge inspection and unmanned aerial systems or drones for aerial observance, the agency added, though “new criteria” will be required when using those devices to insure that no defects are missed.

[Side note: The New Jersey Department of Transportation released a video on November 4 that showcases how drones are replacing “boots on the ground” at the agency, “increasing accuracy, speeding up data collection, and providing access to hard-to-reach locations for divisions throughout the department.”]

What is the estimated cost of its new rulemaking? Approximately $1.65 million annually, FHWA said – adding that while it expects this proposed rulemaking to “result in significant benefits,” those benefits are “are not easily quantifiable.”