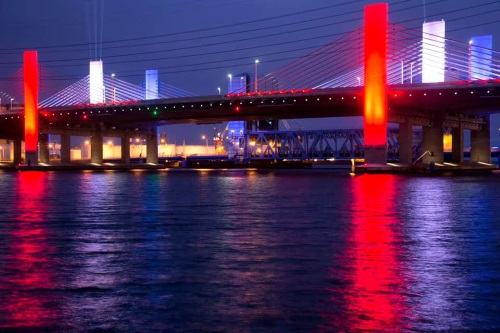 A $21 billion transportation plan proposed by Governor Ned Lamont (D) on November 7 would invest $14 billion in Connecticut’s roads and bridges plus $7 billion in its public transit systems over the next decade – and would rely on interstate bridge tolls for part of that funding.

The governor’s plan includes a proposal to place electronic toll gantries at 14 highway bridge locations across the state; 11 of which are located on interstates, including I-95, I-84, I-91, I-395 and I-684.

Connecticut’s tolling proposal matches a similar effort instituted in Rhode Island in 2018 – an effort that survived a federal court challenge in March – although in Rhode Island’s case, its interstate bridge tolls apply only to heavy trucks.

The governor’s $21 billion plan, which breaks down to $2.1 billion worth of investment in Connecticut’s transportation system annually, is a more than $500 million per year increase compared to the previous level of state investment – which is roughly $1.6 billion per year, according to news sources.

“For generations, the state has neglected critical investments in our infrastructure, hampering economic growth and leaving residents in endless hours of traffic wondering why state officials didn’t fix these problems years ago,” Gov. Lamont said in a statement.

He added that with six of the worst traffic bottlenecks in the country and 65 percent of its highways more than three decades old with 12 percent of its bridges rated in poor condition, “virtually anyone who regularly uses Connecticut’s transportation system agrees that the state desperately needs to make targeted improvements that reduce congestion and make travel quicker, safer, convenient, and reliable”

To pay for this 10-year transportation plan – dubbed Connecticut 2030 or CT2030 for short – the governor proposes to use a mix of fiscal resources, including:

“For the future of our state, we can no longer kick the can down the road on these improvements – we must fix this long overdue problem and move our state forward today,” the governor noted.