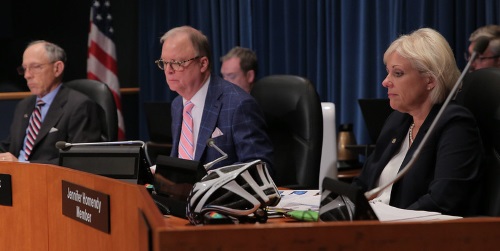 A National Transportation Safety Board hearing on November 5 called for more “concerted action” from federal and state agencies to improve bicyclist safety – and, by extension, that of pedestrians – via improvements to roadway infrastructure, enhanced bicyclist conspicuity, and the “mitigation of head injuries” to bicyclists through mandatory helmet laws.

[Above photo by the NTSB.]

“Last month, when the fatality numbers were released by the National Highway Traffic Safety Administration, we learned that 857 bicyclists died in crashes with motor vehicles in 2018; that’s a 6.3 percent increase over 2017.  And this was a year when total road fatalities were down by about 2.5 percent,” said NTSB Chairman Robert Sumwalt at the hearing. “So something is askew here.”

Eric Emery, NTSB’s safety research division chief, noted that “bicyclists – like pedestrians and motorcyclists – are considered vulnerable road users because they are unprotected by an enclosed vehicle compartment leaving them more vulnerable to injury or death in the event of a crash with a motor vehicle.”

He added that “although they comprised a small percentage of traffic fatalities overall,” bicyclist fatalities are comparable to deaths resulting from railroad or marine accidents and represented more than twice the number resulting from aviation accidents in that same year.

“Although the NTSB has begun to address safety issues relevant to vulnerable road users it has been 47 years since we have examined bicyclists,” Emery noted. “Consequently, there’s a need to update our understanding of bicycle safety in the United States.”

Ivan Cheung, an NTSB transportation research analyst, noted that improving roadway infrastructure so that motor vehicles are separated from bicyclists, such as with separated bike lanes, would likely reduce the number of the most serious crashes. He added that at intersections, where more than 65 percent of collisions occur, investigators determined treatments that clearly denote right-of-way using color, signage, medians, signals and pavement markings would likely reduce the number of crashes in those environments.

“An effective way to increase adoptions of infrastructure safety measure is to include them in official guidance and standard documents, such as the guide for the development of bicycle facilities which was last published by the American Associations of State Highway and Transportation officials in 2012,” Cheung pointed out in his remarks.

“However, the current edition does not contain information about separated bike lanes and safety treatments of intersection, such as bicycle signal face and two-stage bicycle term box,” he said. “So [NTSB] staff is proposing a recommendation to ensure that bike lanes and intersection treatments are included in the next revision for the [bike] guide.”

According to AASHTO committee staff, revisions to its bike guide are underway. The organization also said that an updated guidebook regarding infrastructure designs for improving pedestrian safety is expected to be published in 2020.

NTSB’s Cheung also emphasized that the agency’s staff is proposing recommendations to the Federal Highway Administration to include separated bike lanes and intersection safety treatment in the proven safety countermeasure initiative in its Every Day Counts program.

To help improve “awareness” of bicyclists and pedestrians on the part of motorists, Jana Price – NTSB’s senior human performance investigator – said the agency is recommending further research into “vehicle to pedestrian” or “V2P” communication systems that can provide alerts to motorists, bicyclists, and pedestrians alike, which may increase the likelihood that an action will be taken to avoid potential collisions.

Finally, NTSB’s Cheung said the agency will recommend the formation of a “comprehensive national strategy” to increase bicycle helmet use for all ages; one that includes both “legislative and non-legislative intervention methods.”

Though the “primary focus” of the agency’s report is on crash avoidance, he said that – in those instances when crashes do occur – the use of a helmet was the single most effective way for riders to reduce their chances of receiving a serious head injury.

As its research showed that less than half of bicyclists wear helmets and that head injuries were the leading cause of bicyclist fatalities, the NTSB recommended that all 50 states, the District of Columbia and Puerto Rico, require that all persons wear a helmet while riding a bicycle.

“Despite the proven benefits of head injury mitigation, helmet use among bicyclists of all ages is low,” he said in his remarks. “Bicycle helmet laws for children and adults are identified as the most and second most effective behavioral safety countermeasures.”

NTSB expects to publish a final report encapsulating it bicycle/pedestrian safety ratings in the coming weeks.