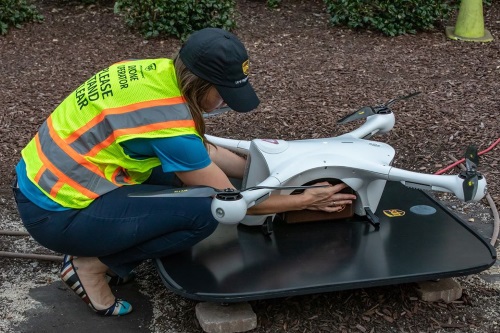 UPSFF – a subsidiary of United Parcel Service formed in July – said in a statement that the drones flew autonomously but were monitored by a remote operator who could intervene if necessary.

The drone hovered about 20 feet over the properties and slowly lowered the packages by a cable and a winch to the ground – with one of the packages delivered to a CVS customer whose limited mobility makes it difficult to travel to a store to pick up a prescription.

The companies said in a statement that those deliveries “mark another milestone” in a recently announced collaboration between UPS and CVS to develop a variety of drone delivery use cases, including business-to-consumer operating models.

“This drone delivery demonstrates what’s possible for our customers who can’t easily make it into our stores,” said Kevin Hourican, president of CVS Pharmacy. “CVS is exploring many types of delivery options for urban, suburban and rural markets. We see big potential in drone delivery in rural communities where life-saving medications are needed and consumers at times cannot conveniently access one of our stores.”

The deliveries also reflect an “important step” for UPSFF as it expands operations beyond those it currently offers on hospital campuses via its Part 135 Standard certification issued by the Federal Aviation Administration in October; a certification that allows it to collect payment for drone deliveries and to fly as many drones supported by as many operators as necessary to meet customer demand.

The companies said they plan to ramp up their ongoing drone delivery program in the coming months in order to bring to market the speed and convenience advantages of unmanned aerial vehicles or UAVs, commonly called drones.

UPSFF and Matternet said they have completed more than 1,500 revenue-generating drone deliveries of medical samples at WakeMed Hospital in Raleigh, N.C., since launching service there in March – a service initially provided with oversight from the North Carolina Department of Transportation.

Scott Price, UPS chief strategy and transformation officer, noted that UPSFF is now “building out its ground infrastructure” to enable the expansion of its drone delivery service to several industries in the future.

“We now have an opportunity to offer different drone delivery solutions, tailored to meet customer needs for speed and convenience,” he said. “We’re delighted to build new services that will shatter preconceived notions of how, when and where goods can be delivered.”