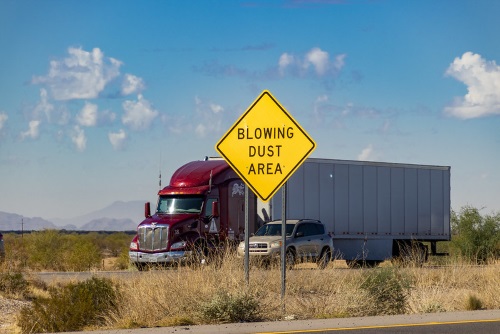 A $6.5 million dust storm detection and warning system developed by the Arizona Department of Transportation is slated to begin operation along a 10-mile stretch of Interstate 10 south of Phoenix in the coming weeks.

That money came from a $54 million federal grant the agency received for widening stretches of I-10 between the towns of Eloy and Picacho, as well as between Earley Road and Interstate 8 in Casa Grande to three lanes in each direction; an effort that cost $115 million in total.

The agency explained that the weather radar, which will be mounted on a 20-foot tower at the State Route 87 interchange in Eloy, can detect storms more than 40 miles away. This radar will complement 13 sensors mounted on posts next to the freeway that use beams of light to determine the density of dust particles in the air, it said.

The Arizona DOT noted that the system’s closed-circuit cameras allow its traffic operations center in Phoenix to view roadway conditions in real-time, while in-pavement sensors report the speed and flow of traffic. If vehicles need to slow down due the approach of a dust storm, the center can activate variable speed limit signs – which are placed every 1,000 feet for the first mile in each direction and then at two-mile intervals along that 10-mile section of I-10 – and change them from 75 mph to as slow as 35 mph.