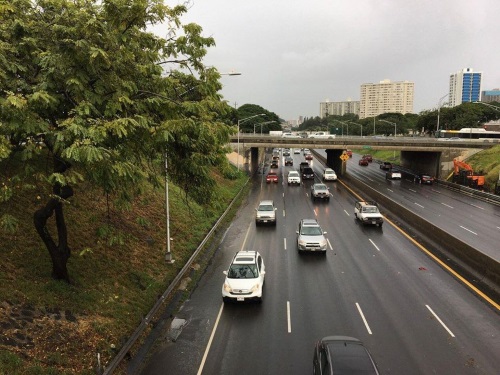 Beginning this month, the Hawaii Department of Transportation will mail “driving reports” to thousands of vehicle owners across the state to gather mileage data as part of the agency’s three-year study of whether a road usage charge or RUC could effectively function as a replacement for the state’s motor fuels tax.

The money for that study comes from a $95 million five-year fund authorized by the 2015 Fixing America’s Surface Transportation or FAST Act to support large-scale RUC pilot studies by states or groups of states.

In a RUC system, the agency said drivers would pay to use roads based on the number of miles they drive instead of how many gallons of fuel they burn. Like the gas tax, RUC funds would go into the state’s highway fund which pays for the upkeep, improvement, and enhancement of the state surface transportation system.

“The driving report will start arriving in mailboxes in November for most car owners who recently had their annual safety inspection,” said Jade Butay, the Hawaii DOT director, in a statement. “It will compare what they paid in gas taxes over the last year to what a road usage charge could cost for the same vehicle and mileage.”

Butay added that the driving report will use the two most recent valid mileage records available for a vehicle through vehicle inspections, estimate the amount paid in gas taxes based on the vehicle make and model, and show what the same vehicle would pay under a RUC. The agency stressed that this report “is not a bill” and that no payment is required on the part of motorists.

The first set of driving reports will go out to approximately 50,000 households in November, the Hawaii DOT said. Then starting in January and continuing throughout 2020, owners of about half a million vehicles will receive the driving reports and be asked to take the online questionnaire.

The final phase of Hawaii DOT’s three-year study – which began in 2018 – will start in 2020 and involve approximately 2,000 volunteers testing an RUC system.

A final report is due to Hawaii’s legislature and governor to ultimately decide if the RUC is implemented in Hawaii, as well as to the U.S. federal government, which is examining alternative ways to replenish the highway trust fund via means other than motor fuel taxes.

But Ed Sniffen, deputy director of the Hawaii DOT’s highways division, cautioned in a statement that switching to an RUC – if agreed to – won’t happen overnight.

“Even if the research indicates the RUC is a feasible alternative to the gas tax, discussions with states who have been working on this for many years indicate that establishment of a new system could take up to 10 years,” he said.