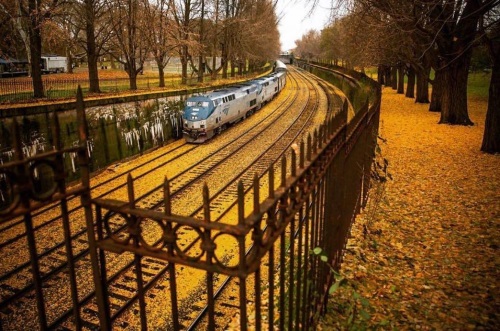 A wide-ranging House of Representatives Transportation & Infrastructure Committee hearing regarding Amtrak included growing concerns about the state-level impacts of the national passenger rail operator’s ongoing service cutbacks as part of a larger effort to reduce costs.

[Above photo via Amtrak.]

“Mr. [Richard] Anderson [president and CEO of Amtrak], all we are seeing are cuts. We need to hear what your long-term plans are for strengthening and growing Amtrak service,” noted Rep. Peter DeFazio, D-Ore., chair of the T&I committee, in his opening remarks.

“In August, I held a meeting to talk about the state-supported service that ends in my district— the Cascades route. We have dismal ridership because passengers can’t reliably expect the train to meet its destination at the scheduled time,” he said.

Rep. DeFazio added that solving that and other Amtrak issues will require more federal funding.

“The thing is, people want national passenger rail service,” he emphasized. “To get there, we have to stop nickel and diming Amtrak to death and get over this notion that Amtrak can help meet the far-reaching transportation needs of our country without real federal investment that both expands services and improves the system that we have.”

Rep. Daniel Lipinski, D-Ill., chair of the Railroads, Pipelines, and Hazardous Materials Subcommittee that held the hearing, added that Amtrak funding reauthorization expires at the end of September next year.

“Amtrak’s long distance services are a critical economic lifeline to many small towns throughout our nation,” Rep. Lipinski said. “Oftentimes, Amtrak service is the only connection these towns have and are especially relied on by those who cannot drive, including seniors.”

Amtrak’s Anderson noted in his testimony that while the railroad has worked with state partners to develop competitive short‐distance corridor services, more work needs to be done to develop intercity passenger rail to connect large and growing urban centers with more frequent service.

Stacey Mortensen – executive director of the San Joaquin Joint Powers Authority, which oversees a state-supported Amtrak route known as the San Joaquin service in California – stressed in her testimony that there are other long-standing funding issues hampering passenger rail service at the state level.

“As this subcommittee is well aware, issues with state supported routes are neither novel nor isolated to our experience,” she said. “In some cases, certain state DOTs reported that Amtrak nearly doubled their taxpayer cost burdens for their state-supported routes from year-to-year. These trends are particularly troubling considering that Amtrak’s leadership has identified routes between 100-400 miles as a growth opportunity.”

She emphasized that “if Amtrak does believe these routes are a growth opportunity, this Congress must require Amtrak to undergo significant changes to ensure it is also a steward of local and state taxpayer dollars and ensures their dollars do not subsidize Amtrak’s other business segments, which already receive ample federal subsidies.”