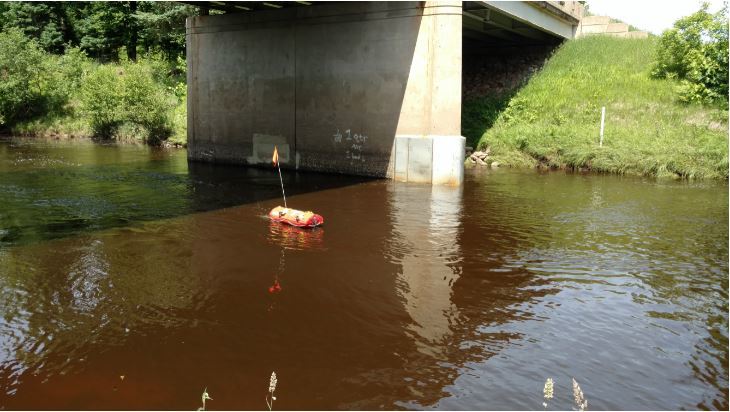 To improve the detection of streambed erosion and degradation around a bridge’s substructure, the Michigan Department of Transportation is deploying four unmanned surface vessels or USVs equipped with sonar and a topside camera; a vessel allows inspectors to take measurements and capture images while positioned safely on the shoreline.

Such remote-piloted drone boats are specifically being used in situations where “scour” may occur, the agency said; when fast-moving storm waters carry off the underwater sediment surrounding the substructure of a bridge, typically exposing the footings or piles.

The Michigan DOT noted it has identified more than 400 bridges on the state highway system and around 1,200 on local roads that are “scour critical,” and in need of close monitoring during high-water events.

When the streambed is washed away, bridge support can be compromised, creating a hazard, explained Chad Skrocki, an assistant bridge engineer for the Michigan DOT’s Bay Region, in a statement.

Yet water turbulence and fast-moving debris can endanger workers using traditional boats and under-bridge tools to conduct inspections. Also, those methods can’t be used in locations with limited vertical clearance, such as beneath a bridge when water levels are high, and they take time to deploy.

“Inspectors need real-time data on what’s happening beneath the turbulent surge, but getting into the water for a visual inspection is risky,” he said. “In the past, scour inspections were difficult, especially during periods where water was surging. We wanted to come up with a method that was safe and easy for inspectors to use.”

After a three-year review of available devices, interviewing vendors, and conducting site visits, the Michigan DOT settled on a USV called Sonar EMILY – short for EMergency Integrated LanYard – which is a maneuverable water-jet-powered buoy about four feet long, two feet wide, and a foot tall. The Kevlar-hulled EMILY unit can be transported in a pickup and operated by a two-person team.

It is equipped with a sonar unit that can measure water depths and produce side-scan and down-scan images of bridge substructures and streambeds, the agency said, and comes mounted with a topside camera to view the underside of bridges.

It does have its limitations, though, noted Michigan DOT’s Skrocki, who served as project manager for this research effort. The vessel’s vehicle, transmitter, cameras, and sensors are all battery powered, which limits operating time, and the wireless signal for control and data collection generally requires line-of-sight for operation.

The cost of the USV, laptop control unit, data processing software, and assorted gear is estimated at $50,000 per unit, the agency said.

“Using the USV is much safer and less labor-intensive than traditional inspection methods for detecting scour,” stressed Skrocki. “It provides a great deal of information, in real time, to the inspector about what is occurring to the channel bottom below the water surface around the bridge substructures.”