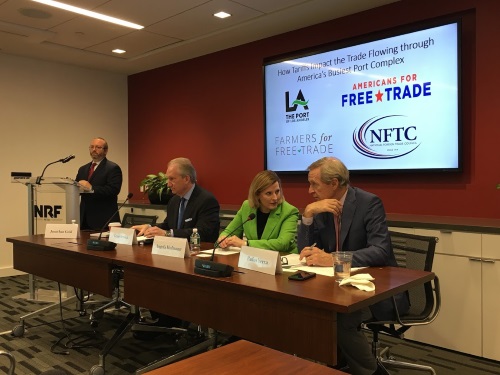 A new study conducted for the Port of Los Angeles and unveiled at a November 12 press event in Washington D.C. indicates that tariffs resulting from the ongoing trade war between the United States and China threatens nearly 1.5 million U.S. jobs and more than $186 billion of economic activity nationwide. Those tariffs are increasing the cost of raw materials – notably steel and aluminum – that by extension raises the base cost of key transportation infrastructure projects across the country.

“As we see materials cost increase due to these tariffs, it may limit the runway of spend we might have when it comes to infrastructure projects,” noted Gene Seroka, executive director of the Port of Los Angeles, at the event.

“Every urban, suburban and rural community across our nation benefits from imports and exports moving through the San Pedro Bay ports, and ongoing tariffs are putting those benefits at risk,” he added. “Some regions and industries are already feeling the pain, and the damage to jobs, income and tax revenue could be crippling down the road.”

The broad impact of tariffs is a threefold disadvantage for U.S. businesses and workers, the report noted: first, import tariffs increase costs for U.S. consumers and producers; second, tariffs make foreign products cheaper, putting U.S. manufacturers at a cost disadvantage in the marketplace; and third, retaliatory tariffs reduce the demand for U.S. exports, putting U.S. companies and jobs at risk as foreign consumer markets look elsewhere for goods and products.

Rufus Yerxa, president of the National Foreign Trade Council, noted during the press briefing that construction “is one the largest single sectors of U.S. industry” and making aluminum and steel more expensive makes cost-efficiency harder to achieve.

“Tariffs are making it more expensive to build infrastructure as steel and aluminum are used in transportation projects and for the electrical grid,” he noted. “We need to get back to more sensible policy.”

Rep. Pete Olson, R-Texas, made a similar point in comments to the AASHTO Journal via email in June of last year.

“Infrastructure in this country is already expensive – communities struggle not only to have new projects built, but also existing ones properly maintained,” he explained. “Every increase in costs makes it harder to get to work and keep Americans and commerce moving. It also makes it more likely that smaller projects get left behind as the price tag for the highest profile ones start to inflate.”