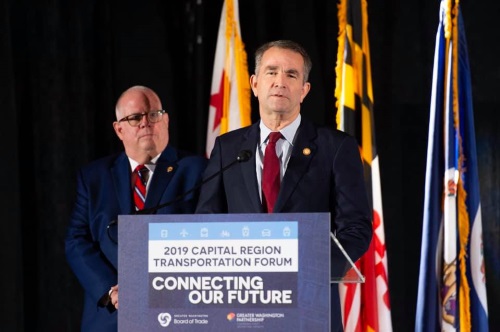 The project is expected to cut commuting time in half for many travelers, reduce congestion in the regular lanes by 25 percent, provide 40 percent more lane capacity over the old bridge.

New bicycle and pedestrian access will connect trails on both sides of the Potomac River and – as it is being designed predominantly within the footprint of the existing bridge and right-of-way to minimize impact to travelers – no homes or businesses are expected to require relocation.

Virginia will then cover rest of the cost of the bridge and the cost of northbound express and general purpose lanes from the George Washington Memorial Parkway to MD-190/River Road.

The project also complements ongoing plans by both governors in their jurisdictions while advancing what the governors described as a “region-wide vision for a seamless network of reliable travel options” around the Capital Beltway, as well as along Interstates 270 and 95, 395, and 66.

“The ‘Capital Beltway Accord’ is a once-in-a-generation achievement for the capital region,” Gov. Hogan said in a statement. “Together with our partners in Virginia, we are building a foundation for even greater economic growth, greater opportunity for our citizens, and advancing real, lasting, transformative improvements for the entire Washington metropolitan region.”

“A new bridge means commuters will get to work and back home faster,” added Gov. Northam. “Our teams have identified a way to fix one of the worst traffic hot spots in the country. This demonstrates what can get done when leaders come together to find shared solutions to tough regional problems. This is about helping people see their families more, grow their businesses, and further unlock the region’s vast economic potential.”

The American Legion Bridge currently carries on average 235,000 vehicles per day – a 390 percent increase since it opened in 1962 – and has been operating beyond its capacity for nearly four decades. More than 40 percent of the region’s population travels this segment of the Capital Beltway, the governors noted in their joint statement, with another 1.2 million people expected to be added to the region by 2040.

“Our transportation network cannot function without fixing the American Legion Bridge, I-495 and I-270,” said Pete Rahn, Maryland’s secretary of transportation. “Without these improvements, our horrendous congestion will only get worse.”

“This is once-in-a-generation project that will improve accessibility throughout the region,” said Shannon Valentine, Virginia’s secretary of transportation “This is a milestone in regional cooperation. We in Virginia look forward to working hand-in-hand with Maryland to deliver this transformative transportation solution.”