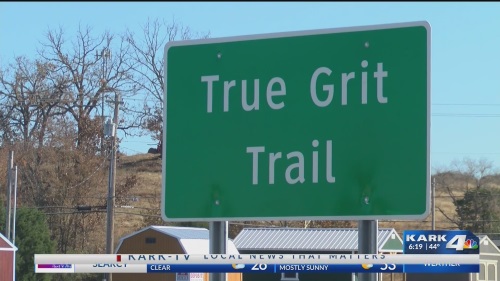 The Arkansas Department of Transportation officially designated a section of Highway 22 as the “True Grit Trail” on November 14 in recognition of the famous novel by Arkansas author Charles Portis.

[Above photo via KARK TV News.]

First published in the Saturday Evening Post and later released as a novel, “True Grit” is told from the perspective of a woman named Mattie Ross, who recounts the time when she – at just 14 years of age – sought retribution for the murder of her father by Tom Chaney.

Ross travels from her home in Dardanelle, Arkansas, along Highway 22 to Fort Smith, where she engages the services of U.S. Marshal Reuben J. “Rooster” Cogburn. John Wayne played the role of Rooster Cogburn in the first of two movies adapted from the novel and won the only Oscar of his career – for Best Actor – for his role in the original 1969 film (a film remade in 2010 with Jeff Bridges playing the Cogburn character earned 10 Oscar nominations).

Arkansas State Rep. Mary Bentley and Sen. Gary Stubblefield sponsored the bill – successfully passed in April – that established the “True Grit Trail” designation, with Rep. Bentley noting that “the popularity of the tale and the attention it brings to the state make a compelling case for renaming a portion of Arkansas Highway 22.”

According to news reports, Governor Asa Hutchinson (R) said “True Grit” is one of his favorite novels and that he enjoyed both versions of the movie. [You can view the trailer for the 1969 version of “True Grit” featuring John Wayne below.]

“I relate to the story because I spent a number of years as the U.S. Attorney in the Western District of Arkansas, the area where Rooster Cogburn upheld the law,” the governor explained.

“Tourist sites related to movies remain popular years after the movie has left the theaters. The True Grit Trail will prove as popular,” he said. “The state is wise to mark and preserve this trail to attract fans of the book, the author, and the movies.”