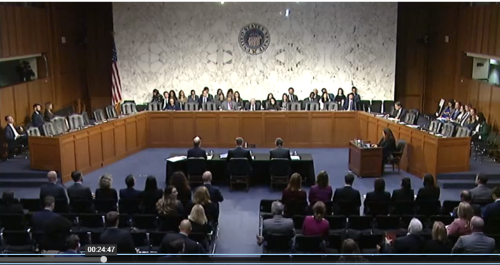 A hearing held by the Senate Committee on Commerce, Science, and Transportation on November 20 stressed that federal regulators need to take a more active role in overseeing the testing and deployment of autonomous vehicle (AV) technology – especially on public roads – while reiterating that until vehicles are fully capable of driving themselves, the human behind the wheel must remain fully in engaged in the vehicle’s operation.

“With AVs already being tested on our roads in more than 34 states, strong federal leadership is required to govern the successful implementation of this technology,” noted Sen. Roger Wicker, R-Miss., the committee’s chairman, in his opening remarks.

Ranking Member Sen. Maria Cantwell, D-Wash., added in her opening remarks over the past three years, more companies have been putting AVs out on the road; sometimes ending in fatal consequences.

“In several of these accidents, the drivers where not paying attention to the roadway and unable to intervene to avoid the crash,” she stressed. “We need to learn from these lessons and make sure that we’re putting safeguards in place.”

Robert Sumwalt, chairman of the National Transportation Safety Board – which had issued a report regarding a fatal collision between an AV undergoing testing with a pedestrian the day before – stressed in his remarks before the committee that “while there is often a desire to jump directly to the end of the technological spectrum to ‘self-driving’ vehicles, it is imperative that regulators and policy makers do not ignore the risks associated with partial driving automation systems currently being operated on our highways.”

He said that the “promise” of automated driving systems or ADS is that such systems will be safer than a human driver. However, “until that promise is realized, the testing of developmental ADS – with all its expected failures and limitations – requires appropriate safeguards when conducted on public roads,” Sumwalt stressed. “Unfortunately, there has been an absence of safety regulations and federal guidance regarding how to adequately evaluate an ADS, which has prompted some states to develop their own requirements for AV testing.”

Joel Szabat, acting under secretary for policy at the U.S. Department of Transportation, added in his remarks that the agency’s Preparing for the Future of Transportation: Automated Vehicles 3.0 guidance, released in October 2018, provides a “framework and multimodal approach” for the safe integration of ADS technology into the nation’s broader surface transportation system.

Based on that guidance, Szabat noted USDOT is focusing on three goals when it comes to AVs: addressing potential safety risks and advancing the life-saving potential of automation; remaining technology neutral; and updating regulations.

That also involves, in his words, “thinking through the potential workforce impacts and training needs, working with industry and stakeholders to describe the capabilities and limitations of the technologies, and identifying and managing data needs while ensuring privacy and addressing security impacts.”

[Side note: The University of Minnesota recently developed an analytical method that would allow AVs to detect cyberattacks as well as erroneous data as a group, while also improving their ability to gather more detail traffic data.]

James Owens, acting administrator for the National Highway Traffic Safety Administration, stressed in his remarks that “while these technologies are improving and enhancing safety, they are not self-driving,” adding that NHTSA is planning to conduct “additional consumer market research” to help identify the most effective ways to communicate and educate consumers about the different levels of driving automation.

“We understand that realizing the lifesaving potential of advanced vehicle technologies will rely heavily on consumer acceptance, and so it is vital to build public confidence through education and outreach,” he added. “We believe this is a crucial component to fostering transparency and understanding of these systems.”