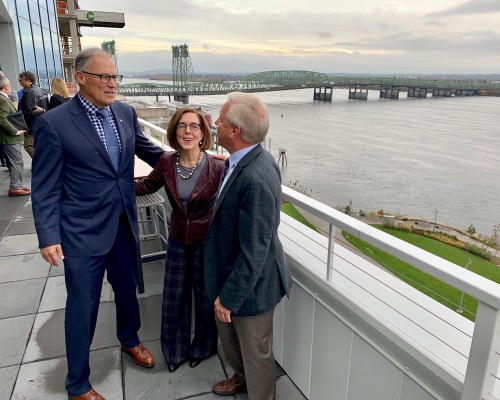 [Above photo via the Washington State Governor’s Office.]

“This is a new day,” Gov. Inslee said in a Medium blog post. “We need to replace the I-5 bridge over the Columbia River to benefit both Washingtonians and Oregonians.”

Gov. Brown noted in particular that the aging bridge poses significant safety risks to drivers during an earthquake, thus “seismic resilience” is the project’s first priority.

“The current interstate bridge is over 100 years old, and it’s showing its age,” she added. “Replacing the interstate bridge is critical to the safety and economies of both Oregon and Washington. Our states are more interconnected than ever, and by working together, we can make our communities and roads safer while we improve mobility and support the economic vitality of our communities.”

During the event, the governors signed a memorandum of intent, an official agreement that reopens the transportation project and lays out next steps, which includes exploring options around high capacity transit to reduce overall traffic congestion on the I-5 bridge.

So far, the two states have allocated $44 million in funding to open an office for the I-5 bridge project; an office that will gather community input, explore available federal funding options, incorporate past progress and research, and report back to both state legislatures with a plan, Gov. Brown noted.

“These are complex and difficult problems to solve but we have the partnership to see this through,” noted Roger Millar, secretary for the Washington State Department of Transportation, who attended the event.

Kris Strickler, deputy director at the Oregon Department of Transportation, added that this state-to-state partnership is “the most important thing going forward” because hundreds of thousands of people cross the bridge each day.

“Those bridges have been out there for more than 100 years — at least one of them has — and we need to build something that lasts that long or at least longer,” he said.