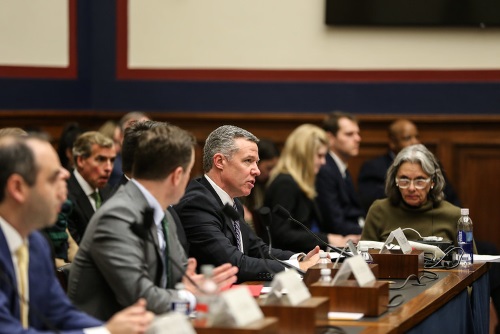 Jim Tymon (seen speaking above), executive director of the American Association of State Highway and Transportation Officials, emphasized the importance of safety and formula funding when it comes to supporting and expanding the nation’s multimodal freight transportation system during a House of Representatives Transportation & Infrastructure Committee hearing on December 5.

[Photo courtesy of Committee on Transportation and Infrastructure Republicans.]

“Safety is the number one priority of every state DOT across the country,” Tymon stressed during the question and answer portion of the hearing, jointly held by the House’s Subcommittee on Highways and Transit and Subcommittee on Railroads, Pipelines, and Hazardous Materials.

“While we need to ensure freight is moved as efficiently as possible, we need to make sure it is moved as safely as possible as well,” he explained. “And while there is a role for both discretionary and formula programs [in the freight transportation sector] the fact that there is such variation from Congress to Congress and administration to administration in how discretionary dollars are distributed adds more merit to the need for formula funding. It provides a more predictable stream of funding that will allow [transportation] sponsors such as states to pick what projects they need to do over a long period of time.”

In his prepared remarks, Tymon noted that it is the interconnected national multimodal transportation system – with states as a principal owner and operator of that system – that has enabled the United States to become the most vibrant and powerful nation in history.

“To that end, we strongly support your efforts to enact a well-funded, multiyear surface transportation reauthorization bill prior to the expiration of the FAST [Fixing America’s Surface Transportation] Act on September 30, 2020,” he emphasized. “Getting the next bill completed on time will ensure uninterrupted investment in our freight transportation infrastructure, which in turn will enable us to build on the current economic expansion.”

Tymon stressed that in order to solve the challenges on both the freight and passenger side, Congress should be looking at all modes of transportation and updating the federal program to provide flexibility so states so can choose projects and strategies that work best.

“As the economy grows and the country demands more products and goods, there will be more demand on the system – that’s why state DOTs are looking for multimodal solutions,” he said. “This is why funding flexibility is important. Gone are the days when we had just departments of roads or highways. This reflects a movement to multi-modal transportation. It is not just about moving freight by one mode or another – it’s an all-of-the-above approach.”

“Facilitating goods movement is a fundamental role of the federal government. Well-established supply chains are now being challenged and re-imagined by the rise of e-commerce. We did not even talk about e-commerce when the last [surface] transportation bill was passed four years ago,” she explained. “Without appropriate planning for last-mile infrastructure, we run the risk of not only congestion – which is clearly a major problem – but total gridlock, especially in urban areas, where 80 percent of the American people now live.”

“Americans don’t realize the complexity of the network [that makes] goods appear on their doorstep. Freight transportation is critical to the economy of this nation,” Rep. Peter DeFazio, D-Ore., chair of the House T&I committee, added during his appearance at the hearing. “[But] its existing infrastructure is at capacity and nearing the end or many cases past its useful life. Yet it is still limping along.”

That’s why Tymon said AASHTO recommends the next surface transportation bill expands eligibility to use federal freight program dollars on any portion of a state’s multimodal freight network as defined in a state’s freight plan.

“State DOTs remain committed to assisting Congress in the development of the next surface transportation legislation that further enables freight transportation to improve our quality of life and to grow the economy,” Tymon explained.

“The number one trend we are seeing is a change in how people expect to get goods and services,” he said. “The real-time nature of what people expect as consumers will put a different stress on the [freight] system than what was expected 20 to 30 years ago – whereas a few days to make a delivery was a push 10 years ago, that’s now turned into 4- to 6-hour delivery windows. There will have to be accommodation in the system to handle that.”