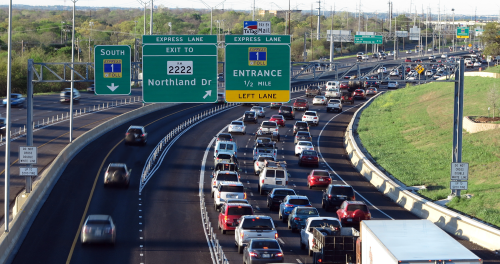 A report issued by New York-based international credit rating agency Fitch Ratings indicates that the construction and use of managed traffic lanes – such as high occupancy vehicle (HOV) and high occupancy toll (HOT) lanes – is growing and that most managed lane or ML projects have “out-performed” the firm’s base and rating case projections in most years.

[Above photo by the Texas Department of Transportation.]

“Although Fitch-rated MLs growth slowed in each of the past three years, this is to be expected, as newer facilities exit the fast growth ramp-up phase,” the company noted in its report. “Over the next year, Fitch-rated MLs projects are projected to finish construction in California, Colorado, North Carolina, and Texas, and portfolio-wide revenue growth may rise as the proportion of facilities in ramp-up increases.”

[Side note: The People’s Choice awards winner in the 2019 America’s Transportation Awards competition was the Georgia Department of Transportation’s Northwest Corridor Express Lanes project that gives motorists the option of paying more to bypass traffic congestion.]

Fitch added that it expects the growth of MLs to continue as they tackle congestion issues while simultaneously producing revenue streams that can be used to pay for roadway maintenance and possibly other capital projects.

The growth of ML projects in the United States also continues to draw international interest. For example, on November 18, a delegation from Japan’s East Nippon Expressway Company visited the American Association of State Highway and Transportation Officials headquarters to learn more about how HOV and HOT roadways are established and managed in the U.S.

The delegation – led by Takahisa Takamatsu (standing in photo at right), East Nippon’s president and CEO – noted that East Nippon is one of Japan’s three major tolling companies, which in combination manage 10,000 kilometers (roughly 6,200 miles) of toll roads across that nation’s five major islands. He added that the average toll paid by Japanese drivers per 100 kilometers (62 miles) of travel is $23; an amount he explained through an interpreter that “the Japanese people do not mind paying.”

Joung Lee, AASHTO’s policy director, explained during the meeting that the United States is now seeing “conversion” occurring between HOV lanes to toll lanes more and more, in addition to the construction of new HOT toll lanes, as “they allow solo drivers to use those lanes for travel time improvement purposes and raises revenue for segments of the highway system that did not have that capability before.”