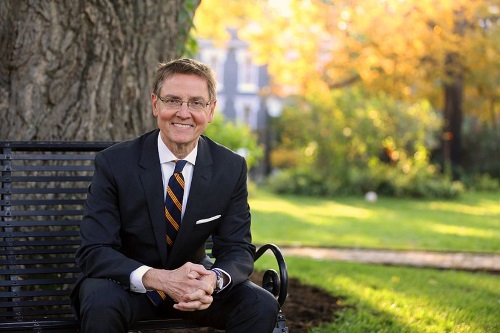 Governor-elect Andy Beshear (D) of Kentucky named former Lexington Mayor Jim Gray to serve as secretary of the Kentucky Transportation Cabinet on December 5; one of five appointments made by the newly-elected governor that do not require confirmation by the state legislature.

[Above photo of Jim Gray via Wikipedia.]

“Each of these leaders have proven their commitment to Kentucky,” Beshear said in a statement. “They are professionals in their fields and know how to bring people together.”

Gray earned a Bachelor of Arts from Vanderbilt University before returning home to help grow his family’s construction firm – the Gray Companies conglomerate, founded by his father in 1960 – which specializes in the design, construction and renovation of large facilities, such as automotive plants, distribution centers, and manufacturing plants, as well as retail and mixed-use developments both in the United States and abroad.

He served as president and CEO of the Gray Companies from 2004 to 2009, shifting to an advisory role as the firm’s chairman after he won election to be the city of Lexington’s mayor in 2010; a post to which he won re-election in 2014.

In 2018, Lexington was named the fourth best run city in the country, and Beshear credited Gray as “instrumental in the revitalization” of that city’s historic downtown and the Town Branch Commons, Rupp Arena, and an expansion of the Lexington Convention Center.

“As we look to bring folks together to move our state forward, we need leaders like Jim Gray,” the governor-elect said. “He knows how to work with others in an honest and respectful way to best serve every Kentucky family. His transportation and government leadership skills are a real asset to our administration and to the Transportation Cabinet.”

“Gov.-elect Beshear and I know and agree that transportation, good roads and highways are keys to economic growth and prosperity. Serving our state in this role is an honor and an incredible opportunity,” added Gray.

“Leading with integrity and transparency are the first orders of business. We’ll also be encouraging and recognizing the good work of the department’s team members, and we will all strive to follow the Golden Rule,” he said. “That’s the way Andy Beshear will lead our state, and that’s why I’m excited and thankful to be part of his team.”