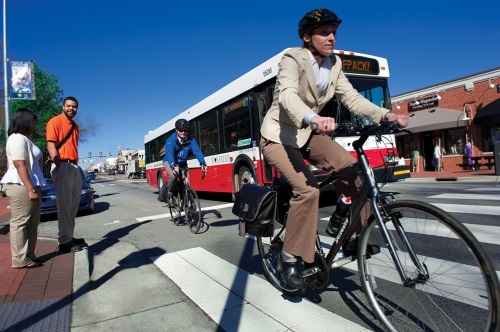 An annual report issued by the League of American Bicyclists highlighted “positive trends” occurring where bicycle safety planning is concerned among state departments of transportation.

[Above photo by the North Carolina Department of Transportation.]

According to the group’s 2019 Bicycle Friendly State report, every state has now taken at least one of its five Bicycle Friendly Actions; state legislatures are increasingly providing funding for biking and walking improvements and helping state DOTs ensure that the safety of all users is a core part of their work; Eight statewide bike plans have been adopted since 2017 and nine are currently in progress; and there is more data available than ever on biking and walking, often thanks to federal and state collaboration.

“The League of American Bicyclists is thankful for all of the state DOTs that cooperated in our survey, state advocates who helped us understand their needs, and national organizations such as AASHTO [the American Association of State Highway and Transportation Officials], GHSA [the Governors Highway Safety Association], and NCSL [National Conference of State Legislatures] that facilitate improvements for people biking and walking through research, collaboration, and policymaking,” the group said in a statement.

“We know that our ranking cannot capture all the good work done by states and we truly appreciate the work done by dedicated people in each state to build a bicycle-friendly America for everyone,” the league added.

[Side note: various traffic technologies are now being tested and deployed to help improve bicyclist safety, especially at intersections.]

However, the organization added that, in 2018, more people were killed while biking than in any year since 1990 according to National Highway Traffic Safety Administration data released in October.

“This continues a tragic trend,” the league said. “All too often, commitments to Vision Zero are not reflected in state goals, public health is not considered in project planning, data is not available about biking and walking, and proven safe infrastructure is not supported or built.”

The organization said that to “address the systemic issues of America’s transportation sector” requires “structural changes” facilitated by state, federal, and local leadership.

“We hope that the 2019 Bicycle Friendly State ranking helps state, federal, and local policymakers understand the need for coordinated actions and the building blocks to address these problems that exist in actions that states are already taking,” it said.