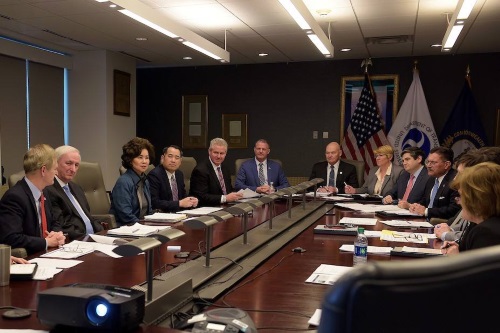 A Federal Register notice issued by the U.S. Department of Transportation on November 26 seeks input from “industry stakeholders and the general public” to help guide the initial direction of the agency’s Non-Traditional and Emerging Transportation Technology or NETT Council formed back in March.

[Above photo by USDOT shows the first meeting of the NETT Council.]

“Inventors and investors approach USDOT to obtain necessary safety authorizations, permits, and funding and often face uncertainty,” she added. “The NETT Council represents a major step forward in reducing regulatory burdens and paving the way for emerging technologies in the transportation industry.”

The agency noted in its November regulatory filing that it is not seeking comments related to automated vehicles or unmanned aerial systems (UAS) – commonly known as drones – except when used in ways that do not fit within USDOT’s existing regulatory structures.

The agency asked for responses to more than a dozen questions in its Federal Register notice, including:

The USDOT said comments on its NETT Council request for information filing are due by January 10, 2020.