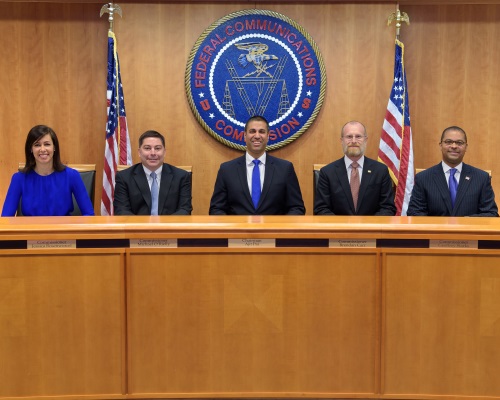 The Federal Communications Commission voted unanimously at a December 12 hearing to move forward with an effort to open up the 5.9 GHz wireless safety spectrum to non-transportation use. FCC commissioners argued their decision was prompted by the “slow deployment” of dedicated short-range communications or DSRC technology, the emergence of new transportation and other communication systems, and escalating demand for unlicensed operations like Wi-Fi.

The FCC commissioners supported a proposal put forward by Chairman Ajit Pai in a November 20 speech that would open up the lower 45 megahertz of the 5.9 GHz band for unlicensed uses like Wi-Fi, while dedicating the remaining 30 megahertz of the band for use by transportation and vehicle safety-related communication services.

However, this is only the first step in the regulatory process. First the current draft of proposed rule must be placed in the Federal Register. Once that occurs, a 30-day comment period begins whereby industry stakeholders and members of the general public may voice their opinions regarding the proposed regulation.

Yet the FCC’s proposal is already drawing strong push back from the transportation industry, with concerns voiced at a House of Representatives committee hearing on December 5 as well.

In a statement, Jim Tymon, executive director of the American Association of State Highway and Transportation Officials, said this effort by the FCC will jeopardize safety.

“We are extremely disappointed in the FCC’s decision to pursue the opening of the 5.9 GHz wireless transportation safety spectrum to non-transportation use,” he explained. “The FCC proposal threatens the ongoing investments being made in communications technologies designed to reduce fatalities on the nation’s roadways. AASHTO and its partner organizations will continue to work to dissuade the FCC from pursuing this course of action because compromising safety is not in the best interest of the American people.”

[Tymon also elaborated on the key safety benefits gain by preserving exclusivity of the 5.9 GHz band in a recent interview with Transportation TV below.]

King Gee, AASHTO’s director of safety and mobility, expanded on those concerns during a Transportation Research Board meeting entitled Promoting Transportation Safety Through the Airwaves on December 10.

“State departments of transportation provide for the safe and efficient movement of people and goods, so protecting the safety spectrum is important to us,” said Gee, who added that the leaders of all 50 state DOTs, the District of Columbia, and Puerto Rico signed a letter sent to the FCC on August 20 that called for “continuing our nation’s commitment to improving transportation safety” by reserving the 5.9 GHz wireless spectrum for transportation-only usage.

“In a very real way, we seem to have plateaued in our success at reducing fatalities,” he explained, noting that while motor vehicle crash fatalities declined from an all-time high of 51,093 in 1979 to a low of 32,479 in 2011, according to National Highway Traffic Safety Administration statistics, they’ve climbed slightly back up to 36,560 deaths in 2018.

“A different paradigm is required to break through this plateau and continue the march to get to zero deaths,” Gee stressed. “It is time to think of surface transportation as a system – not just vehicles, or just roadways, or just drivers, but altogether as a system. And only through the addition of technology will we be able to fully achieve zero deaths on our nation’s highway and streets. But such life-saving technology applications must work right every time without interference.”

He noted that 26 states have currently deployed or are in the process of deploying “roadside units” in pilot applications of connected vehicle technology, with more than 9,000 roadside units installed or planned that broadcast infrastructure information using all seven channels of the 5.9 GHz spectrum.

“This progress is due largely to the designation of the 5.9 GHz spectrum in 1999 for transportation-only use that has given certainty for the development of the technology and use cases for further improving traffic safety,” Gee said. “Sharing or rechanneling the 5.9 GHz band would nullify the progress already made, would unnecessarily delay or even halt implementation of the technology, and could lead to unnecessary loss of life.”