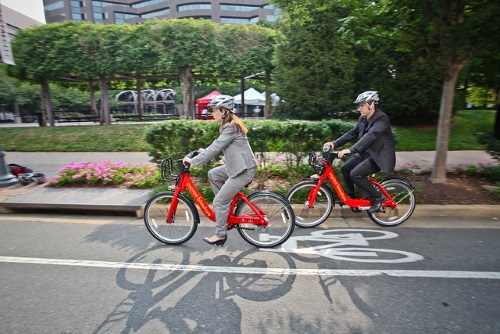 The National Transportation Safety Board issued a 100-page report on December 5 containing 22 recommendations for improving bicyclist safety, including changes to roadway and intersection design, the deployment of collision avoidance technology and blind spot detection systems, plus helmet use requirements for cyclists.

[Above photo by the District Department of Transportation.]

The report stems from a hearing the agency held on November 5 that called for more “concerted action” from federal and state agencies to improve bicyclist safety.

The NTSB noted in its report that the most recent statistics provided by the National Highway Traffic Safety Administration indicate 857 bicyclists died in crashes in 2018 — a 6.3 percent increase over 2017— even though total road fatalities declined 2.4 percent.

In cases where a motor vehicle and bicyclist collide, the NTSB said helmet use is “the single best way” to reduce the occurrence or severity of head injuries, which are the leading cause of bicyclist fatalities.

Yet agency investigators also identified two “primary areas” that, if addressed, would have the biggest effect on reducing the number of vehicle-bicycle collisions: improving roadway infrastructure for bicyclists and enhancing their visibility to other road users.

To that end, the report made four recommendations to the Federal Highway Administration:

The report also recommended that the American Association of State Highway and Transportation Officials include geometric design guidance materials on separated bike lanes, intersection treatments, and the transition between them in the next revision of its Guide for the Development of Bicycle Facilities.

“This country needs a multi-faceted approach to deal with a problem that is only getting worse: more Americans are dying in collisions involving bikes and motor vehicles,” noted Robert Sumwalt, NTSB chairman, in a statement.

“Complex challenges, like making cycling safer for the growing number of people getting around on bikes all over the country, means that we have to look at everything that can make a difference,” he added. “If the recommendations issued in our report are adopted, more Americans on bikes will arrive at their destinations safely.”