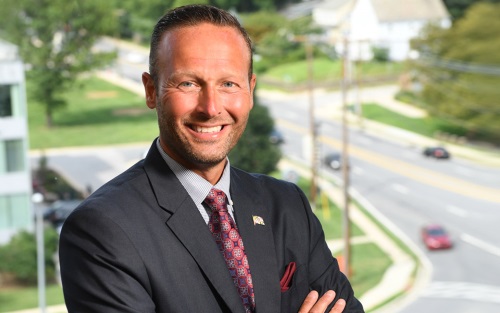 Governor Larry Hogan (R) appointed Gregory Slater to serve as secretary of the Maryland Department of Transportation on December 9; succeeding Pete Rahn, who is returning to his home in New Mexico. Slater’s appointment, which will be subject to Senate confirmation, is effective January 10, 2020.

[Above photo by Towson University.]

“Greg Slater has committed his career to public service, and has earned a reputation around the country as an innovator who is tireless and relentless about transportation solutions,” said Gov. Hogan in a statement. “Greg will continue to lead our efforts to advance the once-in-a-generation Beltway Accord to address some of the worst traffic congestion in the country.”

Slater – a Maryland native who graduated from Towson University in 1997 and from the University of Maryland National Leadership Institute in 2007 – has served as administrator of the Maryland State Highway Administration since March 2017.

He’s spent the last 20 years within the Maryland DOT, focusing on both planning and engineering – particularly on integrating innovation and performance-driven initiatives into those processes. Prior to being named MSHA administrator, he served as deputy administrator for planning, engineering, real estate and environment after seven years of service as planning director.

Slater also serves as chair of the American Association of State Highway and Transportation Officials Transportation Data Management and Analytics Committee and is a member of several Transportation Research Board committees.