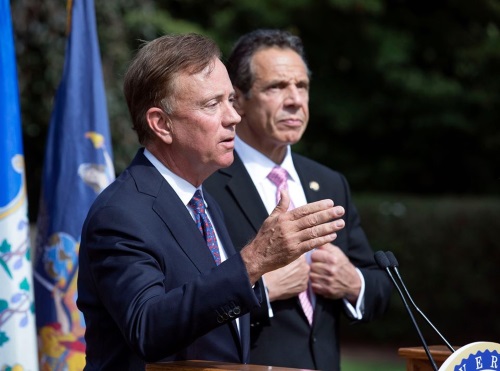 Connecticut Governor Ned Lamont (D) (seen above at podium) and state legislative leaders agreed on December 10 to convene the Connecticut General Assembly into a special session early next month to address a bonding bill and a long-term transportation infrastructure plan proposed by the governor on November 7.

[Above photo of Gov. Lamont and New York Gov. Andrew Cuomo via the Connecticut Governor’s Office.]

“We are committed to investing in transportation without recklessly raiding the rainy day fund, which will only lead to increased taxes and drastic cuts to education, municipal aid, and other vital state programs and services in the future,” the governor and state legislative leaders said in a joint statement.

“Through the Democratic transportation plan, we will not only strengthen our economy but shorten daily commutes and protect the financial future of the state,” they added.

Gov. Lamont’s $21 billion transportation plan would invest $14 billion in Connecticut’s roads and bridges plus $7 billion in its public transit systems over the next decade – and would rely on interstate bridge tolls targeted at commercial trucks for part of that funding.

The governor’s plan includes a proposal to place electronic toll gantries at 14 highway bridge locations across the state; 11 of which are located on interstates, including I-95, I-84, I-91, I-395 and I-684.