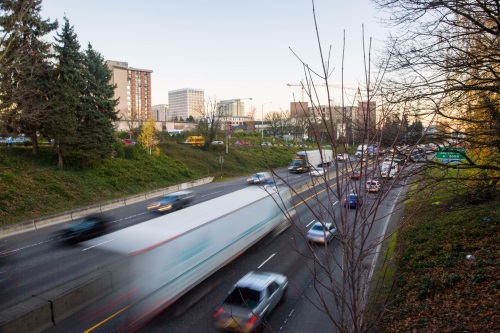 The Oregon Transportation Commission deferred action on the “environmental path” for the I-5 Rose Quarter highway improvement project on December 18 due in part to a request made by Governor Kate Brown (D) on December 17.

“We agree with Gov. Brown that the project would benefit from completing additional work and continuing dialogue with our governmental and community partners,” said Robert Van Brocklin, the commission chair, in a statement.

“In the coming weeks, we intend to direct the department to take further action prior to deciding the environmental review pathway,” he added. “Our decision to wait to discuss this matter to a meeting early in 2020 reflects the commission’s desire to carefully consider the input we heard today from the public and from our elected leaders. We want to make the best decision possible for the community and the state.”

The Oregon Legislature authorized both the Rose Quarter and new tolling projects in House Bill 2017 – known as the Keep Oregon Moving bill – to ease congestion and improve safety.

For example, the Oregon Department of Transportation in its 2018 Traffic Performance Report found congestion on the region’s freeways increased 13 percent between 2015 and 2017, while daily vehicle hours of delay increased by 20 percent.

The agency noted that the I-5 Rose Quarter project will add auxiliary lanes and safety shoulders on the highway between I-84 and I-405 where three interstates intersect and create what is now the biggest traffic bottleneck in Oregon, while also allowing Portland to implement development goals and realize the city’s Central City 2035 Plan.

In HB 2017, the Oregon Legislature authorized $30 million a year in bond payments to pay for the Oregon DOT’s share of the project; payments won’t become available until 2022.

The Oregon DOT noted that expected benefits from the I-5 Rose Quarter project include: a reduction of crashes by up to 50 percent; a savings of nearly 2.5 million hours of vehicle and freight delay each and year; serving as a catalyst for near-term job creation and future redevelopment of the central city area.

Meanwhile, the commission approved the formation by the Oregon DOT of an “Equity and Mobility Advisory Committee” that will be selected in early 2020 to develop an “equity framework” and performance measures for tolling projects, including those on I-5 and I- 205.

In 2018, following the recommendation of a policy advisory committee, the commission submitted an application to the Federal Highway Administration – which received approval in January – to study highway tolling in two locations: I-5 through central Portland and on Interstate 205 at or near the Abernethy Bridge.

The commission added that tolling on I-205 will be evaluated in 2020 under the National Environmental Policy Act process and additional planning work will get underway to better define the start and end points for tolling approximately seven miles of I-5.