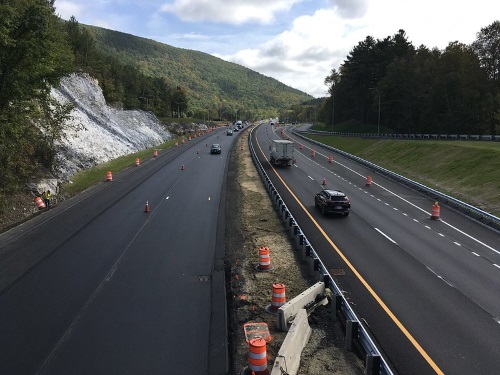 A regional coalition of 12 Northeastern and Mid-Atlantic states, along with the District of Columbia, issued a nine-page draft policy proposal that calls for establishing a cap on greenhouse gas or GHG emissions from transportation fuels while investing millions of dollars annually to develop cleaner transportation systems and more resilient transportation infrastructure.

[Above photo by the Massachusetts DOT.]

The group – formed in 2018 and called the Transportation and Climate Initiative or TCI – said this policy proposal builds off a framework established in October and seeks to reduce GHG emissions from gasoline and on-road diesel fuel by up to 25 percent between 2022 and 2032.

“The transportation sector is currently responsible for more than 40 percent of climate-changing GHG emissions in the region, and soot and smog from cars and trucks are major contributors to lung disease and other health problems region-wide, particularly in low income communities,” TCI said in a statement.

It noted that the auction of pollution allowances proposed under its regional GHG reduction plan is projected to generate up to nearly $7 billion annually; money that could be invested to improve transportation choices for rural, urban, and suburban communities, with each participating jurisdiction deciding how to invest the auction proceeds to “support TCI program goals.”

The proposal essentially creates a regional “cap-and-trade” system, with a ceiling established in the total amount of GHG emissions that can be produced by vehicles powered by gasoline or diesel fuel – a cap that will be lowered over the plan’s 10-year period.

Meanwhile, transportation fuel suppliers must buy allowances via an auction for every ton of GHG their fuel will produce – with states getting the money from those allowances to then fund clean transportation system improvements.

Ultimately the cost of those allowances may get passed on to consumers via higher gasoline and diesel prices at the pump. Analysis by the National Federation of Independent Business of a similar cap-and-trade system established by California found that on average fuel prices increased between 13 and 14 cents per gallon.

The TCI noted a final version of its draft policy or “memorandum of understanding” is expected to be completed in the spring of 2020, following additional public input and analysis. At that time each, all 12 states and the District of Columbia will decide whether to sign the final MOU and participate in the regional program, which could be operational by 2022.