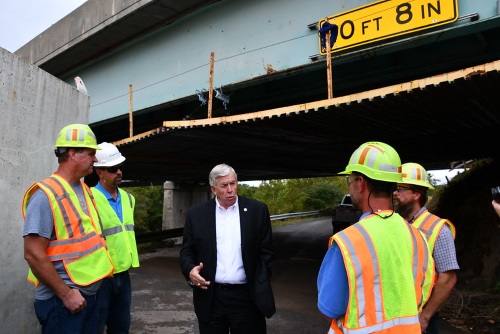 Missouri Governor Mike Parson (R) (seen above) officially noted on December 16 that 20 transportation projects will receive $50 million under the his new transportation cost-share program – projects selected jointly by the Missouri Department of Transportation and Department of Economic Development, with the goal of building partnerships with local entities to “deliver road and bridge projects that have the greatest economic benefit to the state.”

The selected projects will be presented to the Missouri Highways and Transportation Commission for approval in January.

“This is an exciting opportunity for Missouri to turn infrastructure investments into workforce investments,” Gov. Parson said in a statement. “The number of applications shows that these partnerships are not only of great interest but of great benefit to Missourians. It also highlights that many unfunded transportation needs remain in our state.”

The committee then chose 20 applications from that pool of 48 to receive the $50 million; an amount appropriated by the Missouri General Assembly in August to create the governor’s transportation cost-share program, which provides financial assistance to public and private applicants for public road and bridge projects. The program matches up to 50 percent of the construction contract costs for selected projects.

In other news, MoDOT and the University of Missouri System formed of the Missouri Center for Transportation Innovation on December 17 – a research collaboration designed make Missouri a “clearinghouse” for safe, accessible, sustainable and resilient transportation.

“At the rate that transportation technology is changing, if you can’t stay ahead of the curve with your research initiatives, you’ll quickly be passed by others,” Patrick McKenna, MoDOT’s director, said in a statement. “With Missouri’s historical position as a nationwide leader in transportation, we can’t let that happen. The creation of MCTI positions us well for the future.”