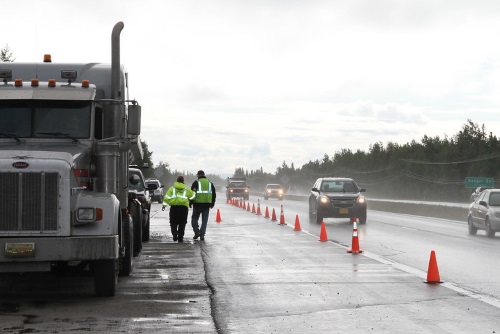 On December 27, the Alaska DOT&PF said that it will launch a new phone system for its 511 information service. On top of that, the agency’s new 511 system will also feature “crowdsourced” data from several sources, including data provided by other motorists via integration of the 511 system with the Waze mobile application, National Weather Service forecasts, and traffic speed data.

Meanwhile, the NJDOT just launched 511NJConnect, a new alert system that’s been under development for a year in conjunction with the New Jersey State Police.

In the event of a sustained stoppage of traffic, the 511NJConnect system – using geo-fencing technology – will identify motorists in the proximity of the incident and send an alert to their hand-held devices.

Motorists within the target area will be given the option to register for automatic text messaging or phone updates throughout the event generated by transportation agency staff monitoring the situation, the agency said.

Once the incident is resolved, motorists who registered for the alerts will be automatically unsubscribed from the system and all personal data will be removed.

“We all understand the frustration and stress that can be caused by being stuck in traffic for an extended period of time,” NJDOT Commissioner Diane Gutierrez-Scaccetti said in a statement.

“While we hope we never have to use it, 511NJConnect is an innovative way to use technology to provide motorists information and status updates during a long-term road closure,” she added. “Just knowing that there is someone out there monitoring the situation can be extremely reassuring.”

Gutierrez-Scaccetti pointed out that the new 511NJConnect system will be used for long-term traffic incidents in which motorists become immobilized for an extended period of time on New Jersey’s Interstate highways, the New Jersey Turnpike, the Garden State Parkway, or the Atlantic City Expressway.

NJDOT is also launching a hands-free, real-time, statewide, traffic, and traveler information service via both Amazon’s Alexa and Google’s Assistant devices, with a similar service expected to be available for Apple’s Siri and Microsoft’s Cortana products in the spring of 2020.

“Voice assistants are the latest technology that have a positive impact on our daily lives,” Gutierrez-Scaccetti noted in a separate statement. “New cars have built-in virtual assistants … and this innovative use of 511NJ allows drivers with this technology to ask for real-time New Jersey traffic information hands-free, without having to take their eyes off the road.”