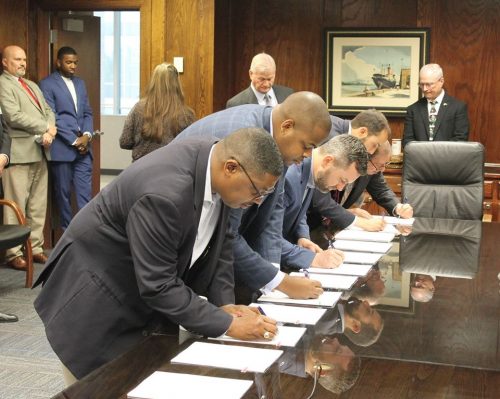 A two-year negotiation effort has resulted in the creation of Louisiana’s first transportation infrastructure public-private partnership or P3 project, which will replace an aging tunnel and bridge in Plaquemines Parish.

[Above photo of signing ceremony via the Louisiana DOTD.]

Funding for this project comes from the $45 million Infrastructure for Rebuilding America or INFRA grant the Louisiana DOTD received in June 2018, some $26.2 million in federal/state funds allocated to the agency, a further $12 million in federal funds allocated by the Regional Planning Commission, and up to 10 percent of the project cost in Grant Anticipation Revenue Vehicle or GARVEE Bond proceeds as this is a toll project.

Work on the Belle Chasse Bridge/Tunnel Replacement Project is expected to begin in the summer 2021, with completion estimated to be sometime in the spring of 2024.

“After over 24 months of procurement processes, negotiations and public input on this alternative delivery method, Louisiana has crossed the finish line and has opened the door to new opportunities to deliver infrastructure in Louisiana,” said Louisiana DOTD Secretary Shawn Wilson in a statement.

“Innovation is never easy, but in the absence of sustainable revenue to meet Louisiana’s transportation needs, public-private partnerships and tolling options are the only other means of delivering transportation infrastructure the public is demanding,” he added.

“This is a major accomplishment in that we are utilizing tools never before used in Louisiana, specifically a Public-Private Partnership, coupled with GARVEE Bonds and an INFRA grant,” said Louisiana Governor John Bel Edwards (D).

“As a result of Dr. Wilson’s leadership, [Louisiana] DOTD’s hard work, and so many other stakeholders, we have made history and have set the stage for many more transportation accomplishments over the next four years,” the governor noted.

The Louisiana DOTD said that the tunnel originally opened in 1956, while the current Belle Chasse bridge was built in 1968. Average traffic volume for both the tunnel and bridge is 35,000 vehicles per day, the agency said, with the new structures expected to ease traffic flow into and out of the Belle Chasse Naval Air Station, improve commute times for parish residents, and make hurricane evacuation routes more efficient for motorists.