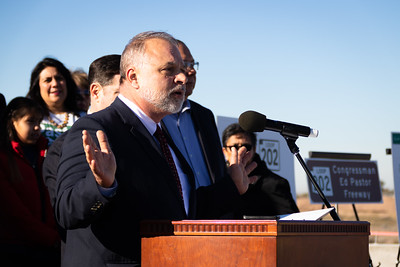 The Arizona Department of Transportation celebrated the opening of the new 22-mile Loop 202 South Mountain Freeway outside of Phoenix on December 21; a $1.7 billion project built via public-private partnership or P3 that helped save $100 million, the agency said.

As part of that effort, the Arizona DOT salvaged more than 1,000 saguaro cactuses, palo verde trees, and other native plants from South Mountain Freeway construction sites, storing them for up to three years in greenhouses before replanting them in new locations.

“This monumental achievement will benefit Arizonans for decades to come,” noted John Halikowski, Arizona DOT’s director, in a statement.

He added that while the new the freeway is open to traffic – it is projected to carry about 117,000 vehicles per day within its first year and as many as 190,000 vehicles per day by 2035 – work on it will continue into 2020 in several areas, including finishing a 6-mile multi-use path between 40th Street and 17th Avenue in Ahwatukee.

“This Loop 202 opening represents a big step forward in connecting the East and West Valleys, as well as prioritizing safety for drivers,” noted Governor Doug Ducey (R). “My thanks to the local, state, tribal, federal and private partners who helped bring this project to fruition ahead of schedule with major cost savings.”

Meanwhile, the Arizona DOT added 20 new electronic speed feedback signs along busy stretches Interstate 10, U.S. 60, and I-40; areas identified by the agency as having higher-than-average instances of speeding, which along with impaired driving and lack of seat belt use is a leading factor in traffic deaths.

The Arizona DOT pointed to studies conducted by the Federal Highway Administration that show such speed feedback signs help reduce speeding and crashes in many areas where they are used.