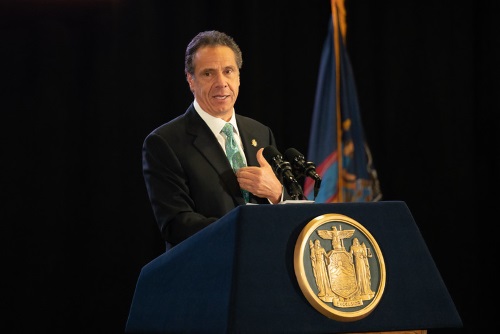 Governor Andrew Cuomo (D) (above) tasked an outside panel of engineers on December 26 to develop a new high-speed rail plan for the state of New York; an effort that will include reviewing past state studies – the most recent issued by the New York State Department of Transportation in 2009 – while examining strategies used in other countries to build high-speed rail networks.

[Above photo via the New York Governor’s Office]

“High speed rail is transforming economies around the world,” the governor noted in a statement. “We’ve been told that bringing this technology to our state is too expensive, too difficult and would take too long – that’s not an acceptable attitude for New York.”

He added that most of New York’s population lives a short distance from the 461-mile-long Empire Corridor, which connects the state through New York City, Albany, and Buffalo. However, rail transit speeds average 51 miles per hour on those lines, meaning it is often the slowest method of travel available to state residents.