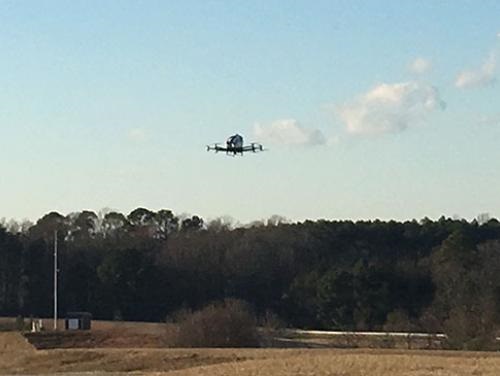 [Above photo via the NCDOT.]

“Flight started in North Carolina over 100 years ago,” noted James Trogdon III, NCDOT’s secretary, in a statement. “So, it is appropriate the demonstration of this cutting-edge, disruptive technology takes place in North Carolina.”

He added that the EH216 autonomous aerial vehicle is designed to function as a taxi service delivering people on pre-programmed routes. The aircraft has been flown in other parts of the world, NCDOT noted, but it has never been demonstrated for the public in North America.

The agency has also been the loci for the development of commercial drone delivery operations as well.

It provided oversight of first-round test flights using drone technology developed by Matternet at the WakeMed hospital/campus in August 2018 as part of the FAA’s three-year Unmanned Aircraft System Integration Pilot Program. It then provided oversight of a commercial service developed from that effort launched by United Parcel Service last year.